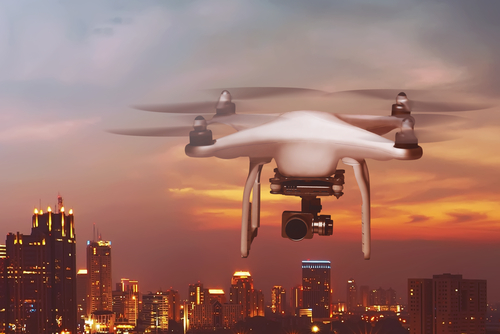 “Commercial civilian drones are too small to be tracked by conventional radar,” said the company in a press release. “They present a serious risk to pilots worldwide, particularly in the immediate vicinity of airfields and airports. Drones are also used for criminal purposes such as drug smuggling and delivering contraband to prisoners. Additionally, security and intelligence services are increasingly concerned that terrorists could use drones adapted to carry small but lethal explosive payloads to attack locations targeted using GPS.

“The risk to aircraft is growing at an exponential rate. Analysis from the Single European Sky Air Traffic Management Research (SESAR) project indicates that by 2050 drones will log more than 250 million flying hours per year over densely populated areas of the European Union, seven times the cumulative annual flying hours of conventional crewed aircraft.*

The Vodafone IoT drone tracking and safety technology trials support the objectives of the European Aviation Safety Agency (EASA), with whom Vodafone has collaborated. The new technology developed by Vodafone also enhances the European Union’s potential to become the centre of global innovation in drone technology in line with the European Commission’s “U-space” vision for innovative and safe drone operations, said Vodaphone.

Vodafone has developed one of the world’s first Radio Positioning Systems (RPS) for drones. This uses a 4G modem and SIM embedded within each drone to enable:

“The Vodafone RPS is combined with Artificial Intelligence algorithms – also developed by Vodafone – to enable very large numbers of drones to be tracked and controlled remotely,” said the company. “Vodafone has placed its RPS research and associated intellectual property in the public domain with no licensing fees for re-use in order to accelerate the pace of drone safety and geolocation innovation worldwide.”

In a preliminary trial in late 2017 Vodafone used its 4G network to control a 1.3 metre wingspan, 2 kilogram X-UAV drone. Throughout the preliminary trial – which took place over a 32-kilometre course around the town of Isla Mayor, near Sevilla in Spain – the drone transmitted a real-time HD video feed and flight data including speed, RPS location and GPS coordinates.

Further trials, which will be coordinated with the relevant authorities, are now scheduled in Spain and Germany through 2018 with the intention of making the Vodafone drone tracking and safety technology available for commercial use from 2019.

The technology behind RPS will also be utilised to boost the functionality of other IoT devices in future – from luggage tags to bicycles. RPS could support, or replace, GPS in some IoT devices, enabling better location tracking, particularly indoors, the creation of smaller devices and enhanced security.

Deputy Director General of the European Commission Matthew Baldwin said: “The Commission supports all trials aimed at realising our U-space vision for safe commercial drone operations in the EU – there is a growing network of demonstrations and projects across the EU.  We look forward to hearing the results of Vodafone’s work.”