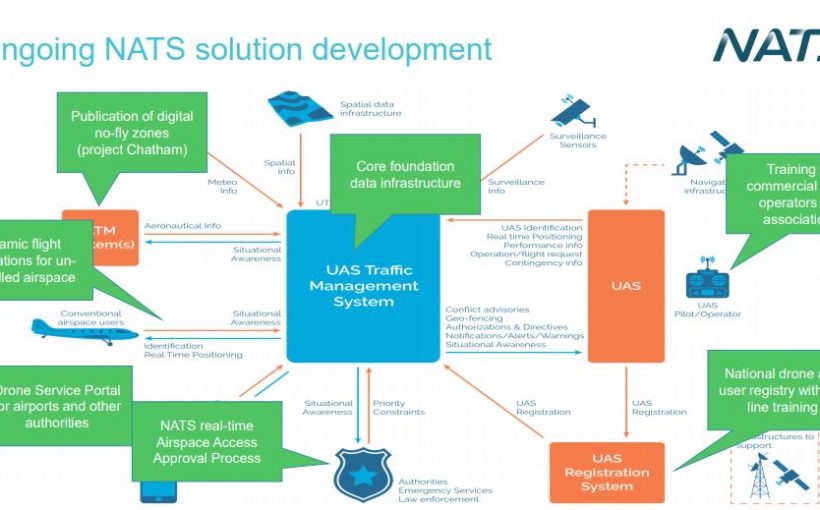 The UK will have key elements of a UTM system operational up to two years ahead of the European Union’s U-Space programme, according to Andrew Sage of UK air navigation service provider (ANSP) NATS, speaking at the RPAS 2018 Civil Operators and Operations Forum in Paris.

The key elements to the NATS’ UTM strategy are an education and awareness campaign, its Drone Assist App – launched in December 2016 and updated in July 2017 to include a fast track “Fly Now” feature – the publication of no-fly zones as part of the Project Chatham programme and the building of a UTM eco-system in line with the U-Space concept.

Drone Assist provides users with advice on where it is safe to fly but also enables NATS to track growth and trends in drone usage, especially useful when tracking drone operations close to airports, said Andrew Sage,

NATS is a key partner in Project Chatham, a Department of Transport project to investigate ways to introduce no-fly drone zones around sensitive areas.  There is a pilot project underway to deliver a CONOPS with a test data set by March 2018, and a plan for the initiation of the service, as a function of the UK Aeronautical Information Service, “to provide a complete and regularly maintained AIXM 5.1 data set to support UK Drone operations.”

The number of incident reports to the Airprox board involving objects believed to be drones coming into close proximity with manned aircraft has risen from six in 2014 to 79 in 2017 (January to September).

“We have already deployed UTM solutions into our ATC operations to automate the approval of an increasing number of VLOS commercial drone operations inside Class A airspace. Early focus on education and awareness ahead of regulatory enforcement has enabled us to gather vital data on the potential safety risk and patterns of usage,” said Andrew Sage. “Commercial applications are already a reality – as of end 2017 we have over 3,600 licensed commercial drone operating organisations in the UK.”