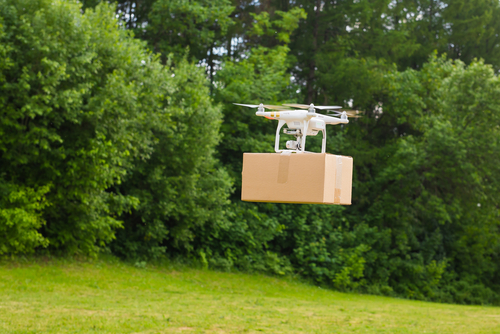 The last two years has seen the start of parcel and post deliveries by drone to remote areas throughout Europe.

In France the postal service will soon start a new drone delivery programme to carry parcels on a set nine-mile route, following approval from the French aviation regulatory authority. The DPDgroup, a subsidiary of the French national postal service, has been perfecting its drone delivery project since 2014 in the south of France, working in partnership with Atechsys, a French drone company.  According to DPD:“Following two years of tests, crowned with success, DPDgroup, GeoPost’s international parcel delivery network and international express subsidiary of Le Groupe La Poste, received authorisation from the General Directorate for Civil Aviation to deliver parcels using drones on a regular 15km route. For the first time worldwide, a regular commercial route makes it possible to deliver parcels by drone. Once a week, the DPDgroup drone travels between Saint-Maximin-La-Sainte-Beaume and Pourrières, in the south of France (Provence region). The route makes it possible to delivery items to a cut-off incubator of companies including a dozen technology start-ups. Their parcels now delivered by Chronopost and DPD France will be sent by drone from the pick-up point in Saint-Maximin.

In 2016 in Germany DHL trialled drone package delivery within the Bavarian town of Reit im Winkl. Residents dropped off packages in “packstations,” from which point on drones would control the entire shipping process and then the complete five-mile trips that usually take half an hour during the winter within eight minutes.

According to DHL: “DHL Parcel has successfully concluded a three-month test of its third Parcelcopter generation. The trial run, part of a larger research and innovation project, was conducted between January and March 2016 in the Bavarian community of Reit im Winkl. It represents the first time worldwide that a parcel service provider has directly integrated a parcelcopter logistically into its delivery chain.”

In November 2017 Portugal announced it was planning to launch special regulatory zones to allow testing of such technologies such as driverless cars and drone delivery services. According to a Reuters interview with Industry Secretary Ana Lehmann the Portuguese government is currently working on the laws needed for such zones. Portugal had restricted the use of drones earlier in 2017.

In March 2017 the Swiss Federal Office for Civil Aviation (FOCA) granted Matternet a certification allowing their delivery drones to fly autonomously over cities at any time of day or night. Clearing this regulatory hurdle means that by early 2018, Matternet partner Swiss Post plans to use the drones to deliver blood samples and other small parcels between hospitals in Lugano, a smaller city with a population of about 56,000.

In November 2017 Mercedes-Benz Vans, Matternet and Swiss online marketplace Siroop announced they had completed 100 flights during their pilot project in Zurich to test an efficient van and drone-based system for on-demand delivery of e-commerce goods. The pilot project, which started with first trials on September 25 2017, “is the first time that extensive beyond line-of sight drone operations with the use of vans as landing platforms are taking place in a major urban area to test a fully-automated e-commerce drone network”, according to Daimler.

In November 2017 Turkey’s Daily Sabah newspaper reported that the national post and telegraph corporation was preparing to begin deliveries by drone within next year. According to Kenan Bozgeyik, board chairman of the Post and Telegraph Organization (PTT), there were plans to carry out deliveries with PTT’s own drones, with implementation differing from region to region. Drone deliveries would initially be used in areas with suitable geographic conditions, with attention given to the package type and transportation challenges in target areas.

In the United Kingdom the Civil Aviation Authority and Amazon’s Prime Air in 2016 agreed to trial drone deliveries – at first to customers with huge gardens, living close to the Amazon depot and requiring items that weigh less than 2.6 kg.  On 14 December 2016 Amazon said it successfully trialled its Prime Air drone delivery service in Cambridge by delivering a TV streaming stick and bag of popcorn directly to the garden of a nearby customer.