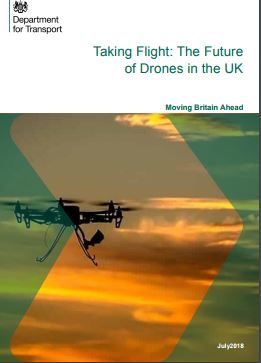 The UK Government has published a consultation document (Taking Flight: the Future of Drones in the UK https://assets.publishing.service.gov.uk/government/uploads/system/uploads/attachment_data/file/729458/taking-flight-the-future-of-drones-in-the-uk.pdf) asking for stakeholder views on its proposed series of drone regulations, including the setting up a UAS traffic management (UTM) system and the kind of counter UAS policy the government should adopt

In May 2018 the Government laid the 2018 Amendment Order, introducing into the Air Navigation Order (ANO) a 400ft height restriction and a 1km restriction around certain aerodromes when air traffic control is operating for small drones. These provisions will come into force on 30th July 2018. As with other parts of the ANO, the CAA are able to exempt remote pilots and SUA operators from these rules if it deems appropriate.

The next steps include amending the ANO as following:

“The views gathered in this consultation will influence the future steps Government takes,” says the consultation document. “Aviation is a reserved matter (i.e. the subject matter has not been devolved to the devolved parliaments in Scotland, Wales and Northern Ireland). As such, aviation legislation, including drone-specific legislation, is the responsibility of the UK Parliament. It is anticipated that any legislation resulting from this consultation will extend to the whole UK. The Government will keep this under review and continue to engage with the devolved administrations as policy proposals develop and any proposed legislation is drafted.”

The following paragraphs outline the proposals for developing a Flight Information and Notification System –  an integral part of any new UTM system.

The option of mandating the use of a Flight Information and Notification System(s) (FINS(s)) for certain drone users and/or for certain activities, has been put forward for consideration. It is proposed the FINS(s) could provide digital, interactive and real time information and a means of two-way communication between the user, other users around them, and relevant Government authorities. We envisage the delivery mechanism could take the form of an electronic application (an ‘app’), and may be used on a phone, tablet or web browser for example, but could equally be delivered via other equipment. Any solution would be built on open standards, to avoid lock-in to a specific vendor and to encourage continued innovation for drone pilots and the sector in the light of evolving market and industry development.

The proposal is not to mandate the specific type of delivery device that must be used. Therefore there is scope for the development of alternative methods of operating the FINS(s) as further technology becomes available.

The system itself could take the broad form of an electronic map with overlays of air space use and restrictions, real-time traffic information, and the ability to notify other airspace users or controllers. The system could also be used to inform the user of changes to airspace restrictions, local traffic or weather conditions around them; for instance advance warning of an incoming helicopter or other aircraft. The user might also be able to use the system to inform authorities of drone incidents or flight plans.

The Government is considering the option of requiring the use of an approved FINS for certain flights of drones above a certain mass to:

The aim of this proposed policy is to increase drone user accountability and to ensure a flight can be made safely, without compromising the security or privacy of others. The real-time data and records made by a FINS could also be useful for enforcement.

The Government is also considering what regulation of a FINS(s) would be appropriate to ensure these policy aims in a risk-based proportionate manner, with effective monitoring and enforcement. Such regulation would also need to ensure value for money to protect consumers and maintain minimum standards.

The proposal being considered would include relevant drone use outside, where the take-off mass is 250g and over. This mass would exclude any fuel, but would include any additional goods added to the drone, such as a camera. Drones with a mass of 250g and over are being considered for inclusion as they are more likely to injure a person in an accident. They are also more likely to have cameras, and fly higher, further and for longer than drones that have a mass less than 250g. It is therefore considered that use of these drones require a higher level of regulation, in order to 35 increase the accountability of these users. The same rationale was applied in the 2018 Amendment Order laid on 30th May 2018 which provide, for example, for registration of SUA operator in respect of flights by small unmanned aircraft with a mass of 250g or more, coming into force on 30th November 2019.

The maximum mass of drones for which the use of a FINS may be required is still under consideration. Heavier mass classes of drone are already subject to higher levels of regulation (see the Introduction chapter of this consultation for current legislation on different masses of drone). It is likely secondary legislation will be used to specify the minimum and maximum mass of a drone that requires use of a FINS, and specify exactly which users and drone activities would be covered by the requirement. Using secondary legislation to achieve this will allow the Government to amend these requirements in future to ensure future proofing of the legislation for such a developing and emerging market.

Should the Government take the decision to include any proposals laid out in this chapter in a draft Drones Bill, those provisions will, of course, need to reflect the rights and obligations of EU membership and, therefore, be in accordance with the various EASA regulations which relate to drones.

The proposals include the “approval” of a FINS. Whether or not it is decided that using a FINS should be mandatory for certain users and/or certain activities, it seems there could be advantages in regulating them and creating an official approvals process. Regulation of the FINS(s) could allow Government to baseline the quality of the FINS(s) and allow control over certain minimum standards; such as where ‘no fly zones’ for drones are shown.

As such, the proposal is for some form of approval process to determine if a system meets the minimum requirements and is therefore fit to be approved; a status that can be revoked if necessary.

The exact minimum requirements for the FINS(s) have not yet been determined. However, as explained above, the system would likely allow two-way, real time communication and display and communicate local airspace data, so that specified drone users could:

To maximise the safety, security and enforcement benefits of the FINS(s), it is proposed that a flight notification could be filed prior to flying. This could be displayed on the FINS, indicating to other users that a drone is being flown in a particular location at a given time and allow the FINS to display and communicate local information to the user, tailored to the proposed location of the flight to the user. The pre-flight notification could be required for both commercial and leisure drone use, or for certain other specified users or drone activities.

The notification will help better manage UK airspace and reduce the likelihood of inflight drone collisions. That the user has identified themselves in this way could be reassuring to the public and promote more accountability in drone operations. It would also make it easier for security personnel to identify those who may not wish to be responsible and have not therefore filed a pre-flight notification, potentially indicating an intention to act unlawfully. Security personnel could then take mitigating action, to establish whether this was the case (for example, by approaching the person for a conversation). It is also possible that law enforcement could use the FINS(s) to identify those in the area that may need to be notified of any incidents, issues or flight restrictions imposed, if, for example, an emergency situation had occurred. There is therefore an added security benefit to the pre-flight notification function.

When would be the most suitable time to file a pre-flight notification is still being considered. Ensuring notifications are filed well in advance of take-off could be beneficial for forward planning and allow authorities (such as the police, or security officials) more time to address any concerns relating to a particular flight. However, a requirement to file a notification too far in advance could be restrictive to drone users who wish to spontaneously fly their drone.

It is also important to consider data reliability of the FINS(s). Large lead times between the pre-flight notification and take-off could lead to inaccurate data on the FINS(s), unless some form of further validation of the flight could be used just before take-off. ─ For example, a person files a pre-flight notification five days in advance of flying, indicating at 13:30 they will use their drone at a given location. Then to ensure this information is still accurate it is verified by the drone user closer to the time of flight.

Further consideration is being given to the possible maximum and minimum time before flight a notification could be made. If these proposals were introduced, a balance would need to be struck between ensuring data reliability and safety in drone use, and not creating overly burdensome legislation.

For context and comparisons within traditional aviation, the general International Civil Aviation Organization (ICAO) requirement is that aircraft should have flight plans filed at least 60 minutes before clearance to start-up or taxi is requested.

With regard to the FINS(s), it will be important for appropriate measures to be put in place so that accurate data is provided to drone users. FINS providers will therefore need to ensure the information displayed on their system is correct, in order for the benefits of this policy to be realised.