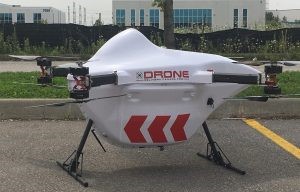 The Robin X1400 (formerly the Raven X1400), as announced earlier this year, will use a dual payload deployment system which would allow both static and tethered cargo deployments. DDC believes the tethered deployment system is the future for delivery in urban settings. With the tethered solution, the drone never lands. It simply deploys its payload by tether while hovering above at a height of approximately 100 feet in the air.

“The Robin, with its 25lbs payload capacity and DDC’s new tethered cargo deployment system is an excellent addition to our expanding drone fleet offering yet another option to customers both in Canada, and abroad.”, commented Tony Di Benedetto, CEO. “We wish to thank Transport Canada for allowing us to continue to expand our platforms capabilities with the granting of the SFOC (Special Flight Operations Certificate).”

The Robin X1400 is now fully integrated with DDC’s proprietary FLYTE management system and is capable of both larger payloads and greater flight ranges, of up to 60km, says the company. Flight testing will commence in the second week of August, 2018.

DDC continues to also make advancements with it larger 400lbs payload drone known as the Condor.