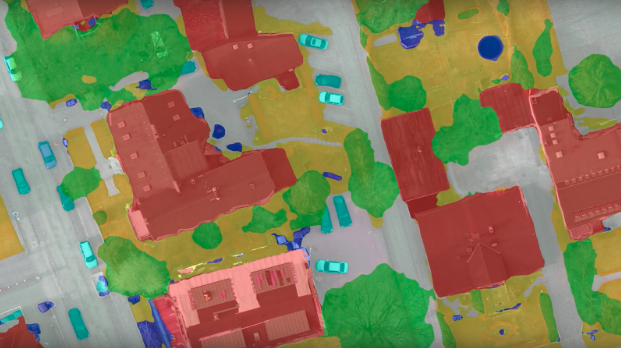 Zürich based Daedalean and UAVenture have agreed to work together to evolve the “Magpie” autonomous flight control, navigation and emergency landing system for air taxis to more wide-ranging drone operations. Magpie is a lightweight version of Daedalean’s technology for personal transports, featuring:

“Today both parties have signed an exclusive partnership to integrate Daedalean’s vision based technology into UAVenture’s AirRails VTOL autopilot system for unmanned applications and to make it available to all AirRails users. This partnership allows UAVenture to provide unrivalled guidance, navigation and control for the most challenging UAV applications to their customers.

The cooperation allows Daedalean to gain engineering validation in real flight at scale, and to gather a high volume of high quality imagery correlated with actual flight data in a multitude of realistic environments for training and testing of their systems.”

(Picture: Downward facing segmentation by on-board deep neural network as part of Daedalean’s landing guidance system. The system recognizes roofs, low and high vegetation as well as other obstacles.  A large enough gray patch is a candidate for (emergency) landing.  The system updates in real time on board on a small single-board computer.
© Daedalean AG 2018)