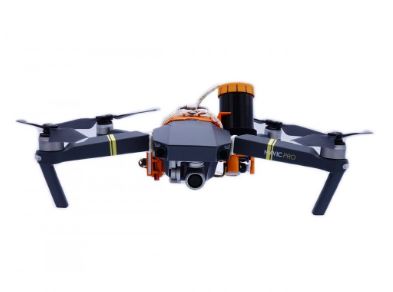 Fruitychutes (https://fruitychutes.com/buyachute/drone-and-uav-parachute-recovery-c-21/dji-drone-parachute-bundles-c-21_31/dji-mavic-pro-drone-parachute-with-automatic-trigger-system-p-256.html) has announced the launch of its lightweight Harrier Launcher  parachute system for the DJI Mavic Pro to protect people and property below in case of a crash or systems failure.

According to the company: “The Harrier features a high-energy compression spring that ejects the parachute out and away from the Mavic Pro quickly.  The launcher has no regulatory or transportation limitations so you can take your Mavic Pro with your Fruity Chutes parachute system anywhere you want.The centrepiece of the parachute system is the Fruity Chutes Iris Ultra Light chute weighing just 0.96oz (27.7g). The parachute has a nominal rating of 2.5 lbs (1.2Kg) @ 15 feet per second (4.6mps) descent rate after deployment providing a nice gentle landing.  The parachute can easily work at heavier load weights of 2.4Kg or more.”

“The parachute system is entirely self-contained, and not reliant on the Mavic Pro power so it works even if the copter’s battery has a complete failure.  The automatic trigger system (ATS) can detect if the drone suddenly falls, rolls, or flips.  Detection of a fall typically takes just 0.75 seconds, or about 16 feet of free fall.  By the time the pilot notices a problem, the parachute will already be ejected.”