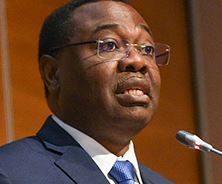 The main theme of the recently concluded 37th Session of the ICAO Legal Committee was modern technology and international air law. “To this end, the Committee decided to establish a working group to consider issues relating to unmanned (pilotless) aircraft operations and their integration into civil aviation, with the aim to identify possible solutions within the framework of the Organization’s on-going work,” said a press release at the end of the proceedings.

The session was chaired by Mr. Terry Olson from France. Its 37th Session was attended by 168 Delegates, representing 70 States and eight International Organizations, and on this occasion it elected its new Chair and Vice-Chairs, with Mrs. Siew Huay Tan from Singapore being elected as the first woman to serve as the ICAO Legal Committee Chairperson.

New electronic platforms for aircraft registration and the provision of relevant data on the registration, ownership and control of aircraft were also envisaged.

(Image: ICAO – Dr. Olumuyiwa Benard Aliu, ICAO Council President, inaugurates the 37th Session of the ICAO Legal Committee as it begins to address some of the most important emerging issues for international civil aviation)