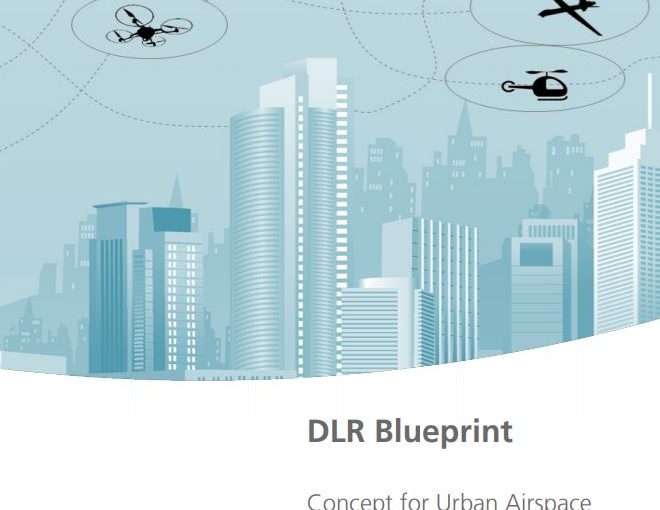 The German Aerospace Centre (Deutsches Zentrum für Luft- und Raumfahrt (DLR) developed a new concept that brings unmanned aircraft of all classes together with conventional aircraft and helicopters within urban airspace and beyond for the very first time. The image of freight drones and air taxis flying above cities is no longer just science fiction, says the DLR.  “The technical development of such aircraft is advancing apace and is set to pose major challenges to air traffic management for large cities and general areas of uncontrolled airspace at an altitude of up to 762 metres. A myriad of new unmanned aircraft will be looking to join the air transport system, and the aim is to ensure that this does not place restrictions on the manned aircraft that have used it thus far. The new DLR concept, in the form of the Blueprint Concept for Urban Airspace Integration, addresses this very issue.”

“At the heart of the concept is the versatile assessment of every single aircraft according to its technical equipment and dimensions,” says Dagi Geister, who leads the Unmanned Aircraft Systems expert group at the DLR Institute of Flight Guidance. “Drones that are well equipped in terms of navigational systems, Detect-and-Avoid sensors and communications and monitoring capabilities could fly in great numbers within a specific airspace segment. But if drones with inferior technology start to be used elsewhere, only a few flights will be permitted within a large area.” In principle, however, the new concept allows all airspace users to fly, regardless of how technically sophisticated they are.

As part of the concept, the versatile classification of technical and aeronautical features is visually represented in an easy-to-grasp way using multidimensional polygons that provide an individual overview of each aircraft. The bigger the aircraft and the more restricted its technical equipment in terms of navigation, communications and the ability to detect other airspace users (whether cooperative or not), the larger the polygon. The better the aircraft’s overall performance, the smaller the resulting polygon.

This may mean, for instance, that a camera drone that has limited technical equipment will have a very large multidimensional polygon when it is in use, leaving only a little space for other aircraft in the respective airspace cell. In turn, larger aircraft with the full complement of technical equipment will have a very small virtual polygon. As such, within a certain period of time, an airspace cell may either be used by a few low-performance aircraft or by many high-performance aircraft.

“The airspace over urban areas is highly sensitive,” says Dirk Kügler, Head of the DLR Institute for Flight Guidance. “There is a lot of critical infrastructure and sensitive sites that are restricted or off-limits to aircraft in flight, so it is vital that all aircraft are assigned a risk-minimised flight path.” According to the concept, flight paths within the ‘U-Space’, as airspace close to the ground will be called, will be assigned via a central U-Space service. Aircraft that register prior to taking off will receive a full simulated and risk-minimised flight path in advance via this service, taking into account airspace users that are already airborne. Critical areas on the ground, such as those with large gatherings of people, will be avoided. This will result in a flight route with as few deviations as possible from the ideal path, and which will be assigned to the pilot in the cockpit or the person in command of unmanned aircraft from the ground.

“Thanks to its comprehensive advance calculations, the central U-Space control system will ensure that collisions never occur,” says Geister. The additional requirement of flying over sparsely populated areas of cities wherever possible means that automated route planning favours particular flight paths and natural points of intersection, such as stretches along rivers.

The concept behind this approach is based on efficient, multidimensional segmentation of airspace (with parameters including position, time, level of equipment and performance requirements), coordinated detection and resolution of strategic conflicts, and specific modelling of the performance of unmanned aircraft. The airspace is subdivided into cells with similar requirements, based on different airspace characteristics such as terrain classes, geofences, availability of U-Space services, air traffic subject to visual flight rules and other non-cooperative airspace users. This leads to airspace management that offers plenty of scope for route planning and implementation when there is low aircraft density, but little freedom under high-density conditions.

The new DLR concept for the future integration of unmanned aircraft into airspace – particularly urban airspace – is a prelude to further research in this area. The DLR research project City ATM will launch in early 2018, and will see the new concept put into practice in sample areas and tested out on test flights. A total of five DLR institutes are pooling their expertise in air traffic management, communications and navigation technology, vehicle concepts, vehicle design, human factors and operational and economic feasibility for the City ATM project. The aim is to provide a technical and efficient demonstration of how unmanned aircraft might be integrated, addressing issues relating to safety and social acceptance along the way.

The research forms part of pan-European planning for the air transport system of the future, known as SESAR U-Space, in which conventional and unmanned aircraft are intended to operate alongside one another.