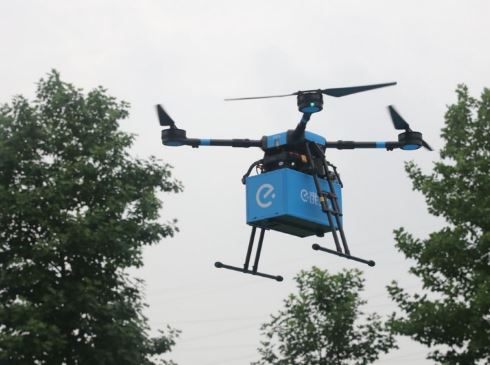 The China Daily news service (http://www.chinadaily.com.cn/cndy/2018-05/31/content_36303072.htm) reports that the Alibaba-owned Ele.me food delivery company has been given permission to deliver food to residents of Shanghai’s Jinshan Industrial Park. According to the news service “Approval to deliver food by drones on 17 different routes from over 100 local restaurants was received by Ele.me, allowing them to cover an area of 58 square kilometres.”

The move marks the first known commercial use of drones in China to deliver food; drones are used for approximately 70% of the total delivery distance, with one employee packing the food at one end of the route, then another employee receiving the food to complete the delivery manually by driving to the final destination, according to the news service.

Although the top payload capacity of the drone is 6kg, the food box in which the food is placed weighs 485 grams.