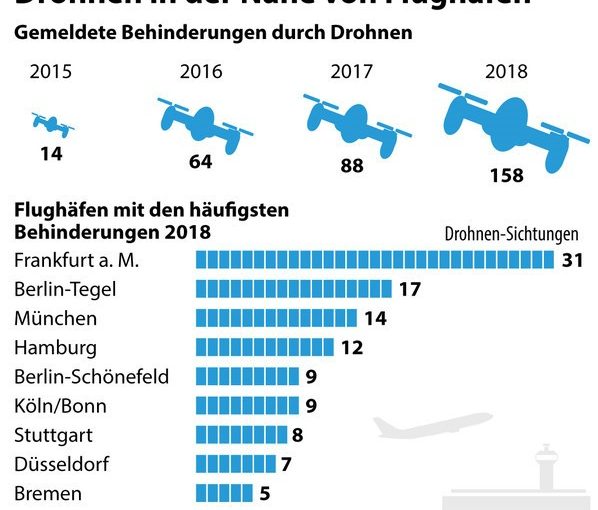 Germany’s The Local news service reports that the country’s air navigation service provider DFS recorded an 80% increase in disruptions to air traffic in 2018 over 2017 with 158 incidents logged.

Frankfurt airport saw most disruptions, with 31 incidents logged. followed by Berlin-Tegel (17), Munich (14) and Hamburg (12). “In 2017, a total of 88 cases were reported, while in 2016 there were 64 incidents,” says the news service. “The main problem for air traffic control is that threats are not visible on the radar, DFS spokeswoman Ute Otterbein told the Hessenschau. The figures are therefore based on information from pilots who report a drone sighting to the air traffic controllers. Otterbein said there had been no major incidents involving drones in Frankfurt. However, last summer take-offs and landings were blocked for several minutes following the sighting of a drone. The reaction to drone sightings is decided on a case by case basis, depending on the perceived risk.

“The Federal Association of the German Air Transport Industry (BDL) called for more safety measures. “We consider it necessary for drones and their owners to be subject to compulsory registrat on so that responsibility can be clearly assigned,” said BDL boss Matthias von Randow. Drones should also be equipped with technology, such as a transponder, that makes them identifiable to authorities and other aircraft.”