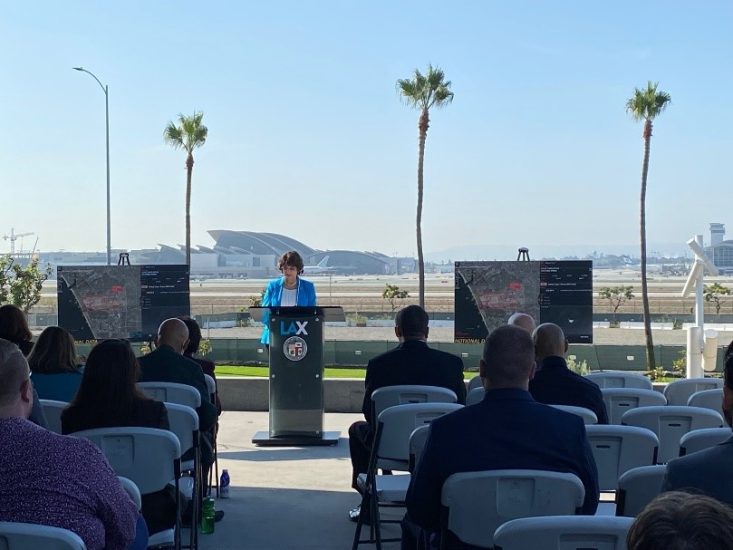 The TSA and Los Angeles have a long-standing partnership working together to find innovative new solutions to passenger safety and security. Los Angeles was selected as a testing site for the latest UAS detection technology test bed due to the airport’s diverse aviation operations, large number of enplanements, frequency of UAS activity, and high passenger volume.

Data collected at the Los Angeles site will help TSA expand this capability to other airports in the future and raise awareness of the risks of encroaching on restricted airspace. The precise location of the DTI technology at Los Angeles is not publicly disclosed.

n recent years, UAS have grown in popularity and are used for a wide range of commercial and recreational purposes. DTI technology, which operates 24 hours a day, is capable of using radio frequency waves, electro-optical, radar, acoustic, and thermal imaging to identify the precise location of a UAS.

While many UAS are equipped with Global Positioning System (GPS) software that prevents their use in restricted locations, some operators do not follow rules and safety restrictions. Operators who violate restricted airspace are subject to drone confiscation, civil penalties and potential criminal prosecution, according to the Federal Aviation Administration.

Since 2021, there have been approximately 90 visual sightings and 5,200 technical detections within three miles of the Los Angeles perimeter. So far this year, approximately 38 drones have been visually detected at Los Angeles including a drone that was reported within 700 feet of an aircraft several days before Super Bowl LVI when SoFi Stadium and Los Angeles were designated as no drone zones.

In June 2022, a drone was flown near a runway at Ronald Reagan Washington National Airport (DCA) in Arlington, Virginia. The FAA shut down air traffic for about 45 minutes following that close call in restricted airspace around DCA.

In support of the Department of Homeland Security’s role in UAS security, the Los Angeles test bed is federally funded and part of TSA’s collaboration with airport, local law enforcement and interagency partners. This test bed will help to determine effective and suitable technologies that could be used in an operational airport environment. Information and data collected from the TSA UAS test beds will assist stakeholders in protecting against threats to aviation, surface, and related transportation domains.

“One of the main objectives of the TSA UAS Test Bed Program is to continuously assess relevant technologies and keep pace with the ever-evolving capabilities within the UAS community,” said TSA’s UAS Capability Manager Jim Bamberger. “Working together with our federal, state and local partners and the intelligence community, we are leveraging our collective technical capabilities to prevent disruptions within the transportation sector.”

A similar project has been underway at MIA since last summer. The systems under assessment have shown minimal downtime and detected thousands of UAS flights in the vicinity of the airport. TSA continues to collect data at that site with the ultimate goal of mitigating the risks unauthorized UAS operations pose to the nation’s transportation system.

“As Chairwoman of the appropriations subcommittee that oversees the TSA budget, I was pleased by the selection of Los Angeles as the second domestic airport to host the UAS detection technology test bed. Combined with the first test bed in Miami, this program will allow TSA to validate the effectiveness of UAS detection technology in real-world, aviation environments,” said Congresswoman Lucille Roybal-Allard. “While there are many beneficial uses for drones in our society, it is becoming far too common that drones are sighted near airports, which presents significant security risks and unnecessary disruptions to the traveling public. I commend TSA, local law enforcement, and LAWA for their collaborative efforts that enabled the selection of Los Angeles as the second site for this important initiative.”