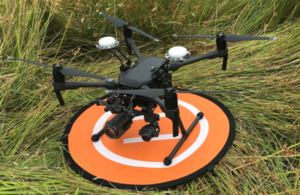 According to the AAIB:

“The DJI Matrice 200 series aircraft crashed whilst operating in rain. The accident had been caused by a fault with the No 4 motor electronic speed controller (ESC). Moisture was also found on the No 3 motor ESC, but it was not established if this contributed to the accident. However, this investigation reviewed other similar accidents and information showed that other Matrice 200 series accidents involving aircraft operating in rain had been caused by ESC failures due to moisture ingress. Other types of DJI Matrice 200 series failures included contamination of the motors by fine particles that the unit did not provide protection against. Failures of the Matrice 200 series aircraft resulted in a loss of power and control, with the aircraft typically falling vertically to the ground. This poses a risk of injury to people on the ground which is not mitigated by the current UK regulations or published guidance material applicable to operating an unmanned aircraft system.

“To address this the following two Safety Recommendations are made to the UK CAA (Civil Aviation Authority):