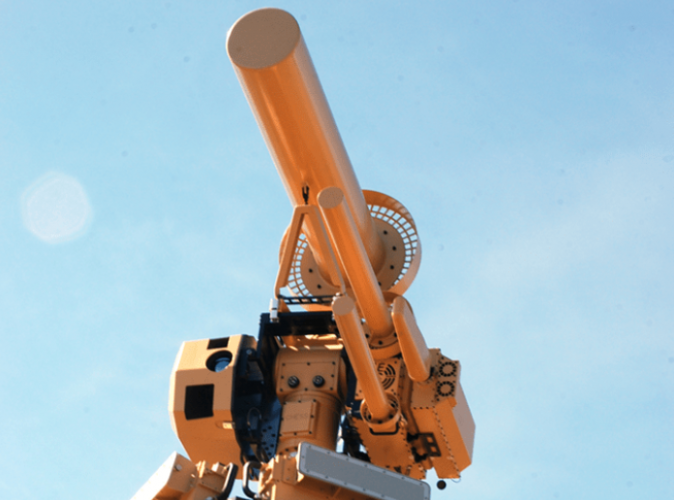 “The demonstration involved Northrop Grumman’s Sophisticated Counter Unmanned Systems Weapon Radio Frequency (SCUWR) C-UAS system of systems, consisting of a Liteye’s Anti-UAV Defeat System “AUDS” and SCUWR’s 30mm X 113mm Chain Gun® mounted on a US Army Stryker armored vehicle. FPID was used to identify friendly aircraft during the engagement. The system of systems approach resulted in the FPID equipped UAS surviving the engagement and continuing its mission. The hostile aircraft did not survive. Operators in the Stryker were not briefed on which UAS was friendly and relied on IFF information from the FPID display inside the Stryker to obtain positive identification of friend or foe prior to engagement.”

Aaron Pierce, CEO Pierce Aerospace, said, “This was the first time getting kinetic with FPID and the results were desirable. I had eyes on the operation from the pilots’ location watching multiple UAS fly down range from the Stryker’s position. I was enthused when the system engaged the hostile UAS with a high explosive round fired from the Chain Gun®, leaving our friendly, FPID equipped UAS, to continue operating in an airspace that was no longer contested. The data from this operational demonstration with a deployed and proven C-UAS system, and other demonstrations recently conducted with the US Army, is instrumental for the continued development of FPID to serve both commercial and defense markets.”

According to Pierce, FPID is a dual-use Remote ID technology suite designed to serve commercial UTM and C-UAS systems. This demonstration reflects positive results for advancing and fielding FPID integrated efforts, including Northrop Grumman’s Mobile Demonstrator – a mobile C-UAS system designed for use in civilian environments.

“It was impressive to see the SCUWR demonstrate the integration of multiple defense capabilities into a layered solution,” said Zac Neumayr, VP Strategic Accounts of Liteye Systems.  “With the threat of small UAS increasing this approach maximizes the ability to protect the warfighter. Liteye is committed to providing top level surveillance tracking, identification, jamming as well as cueing of additional defeat systems to complement this advanced defense platform. We’re eager to get these capabilities to the field.”

Pierce continued, “I am very appreciative of Northrop Grumman and Liteye supporting our demonstrations. This was a big step in advancing FPID’s practical application of Remote ID and I look forward to working with their teams to further develop and field integrated products.”