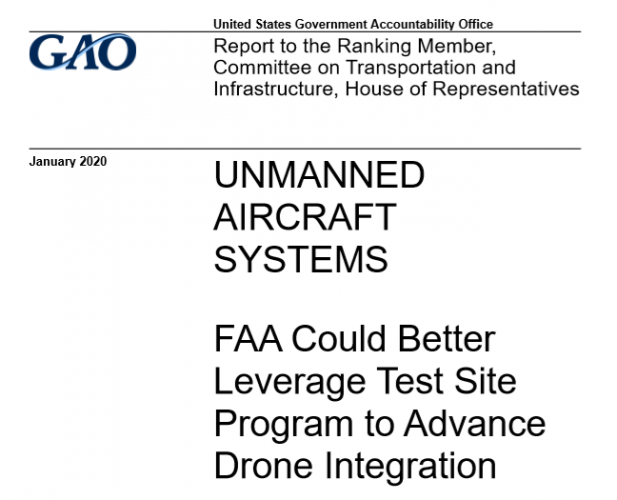 The Federal Aviation Administration (FAA) has not fully leveraged the data or the flight test programme to advance UAS integration at its test sites, according to a new report from the US Government Accounting Office (GAO).

“The Federal Aviation Administration’s (FAA) seven designated test sites for unmanned aircraft systems (UAS) have facilitated about 15,000 UAS flight tests since 2015 and supported a wide range of research,” says the summary of the report. “Both public and private entities have used the test sites to test technologies in preparation for varied UAS activities, from inspecting utilities to carrying passengers. Research conducted at test sites provides data on the performance of various UAS capabilities and technologies; such data could support FAA’s integration efforts.

“While FAA collects this data from test sites, it has not fully leveraged the data or the program to advance UAS integration. According to FAA’s 2018 Roadmap for UAS Integration a key goal of this program is to provide data to support FAA’s decisions on drone integration. FAA officials said the agency intends to use the data to a greater extent in the future to advance integration. Without an analysis plan, however, FAA could miss opportunities to better use the data to inform the overall integration effort, such as to inform UAS operational standards. Also, FAA reports limited public information about how test sites’ research relates to the agency’s integration plans. Agency officials told GAO they were wary of sharing more information about the test sites, citing concerns about, among other things, protecting test site users’ proprietary data. All test site representatives and most users GAO interviewed, however, said that more information on test sites’ research would be helpful for UAS stakeholders’ research efforts. According to FAA plans, the agency must rely on relationships with stakeholders across government and industry to ensure that integration efforts are harmonized. By sharing more information publicly, FAA could demonstrate to such stakeholders how the agency is fostering and using research to inform and advance integration. Further, with more information, more stakeholders may opt to use a test site to conduct their own research, thus potentially increasing data available to FAA to inform its integration decisions.“