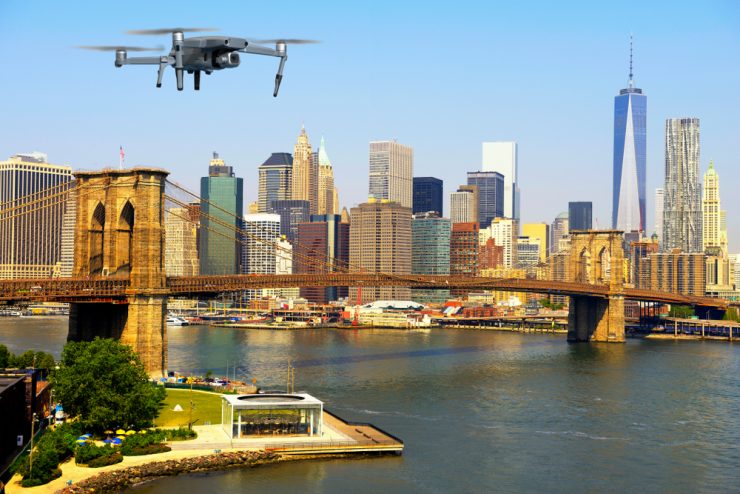 Major unmanned air system (UAS) traffic management companies in the USA have welcomed the Federal Aviation Administration’s Notice of Proposed Rulemaking (NPRM) for Remote Identification (Remote ID) of drones (https://www.unmannedairspace.info/uncategorized/the-key-takeaways-from-the-faas-proposed-usd582-million-remote-uas-id-regulation/) but behind the scenes there will be considerable scratching of heads over how the costing mechanisms outlined by the FAA can help turn their start-up enterprises into long term profitable companies.

According to Aircraft Owners and Pilots Association (AOPA): “the online document logged more than 100,000 views and 1,000 comments within three days of its publication. Initial feedback on the drone identification and tracking notice of proposed rulemaking was decidedly negative.”

The comments from the UTM service supplier (USS) community are likely to be more considered – the NPRM makes clear the direction of travel of potential revenue income from providing UTM services in the USA (“added extras” rather than providing “core services” covered by user fees, as in the air traffic management charging regime in Europe) but it will require a complex web of new partnerships to provide scalable UTM services envisioned by the FAA. Three immediate conclusions stand out.

The FAA assumes each entity operating a UAS would be required to subscribe to a Remote ID USS at an average rate of USD2.50 per month or US30 per year. If these costs were applied to the current fleet of drones this would have generated USD241.72 million – or around USD28.34 million a year. Given that the FAA expects there to be nine UTM service suppliers (USS) qualified as FAA partners in the first year of operations this suggests subscription costs will be able to finance only a small portion of the remote ID service being offered by USSs.

The number of new and renewed Remote ID USS subscriptions is approximately USD3.1 million for part 107 operators and USD5.7 million for recreational flyers. The potential commercial operator market in the USA is around 116,000 entities (https://www.reuters.com/article/us-usa-drones/u-s-agency-requires-drones-to-list-id-number-on-exterior-idUSKCN1Q12O9) who will provide the main clientele for UTM services. According to December 2019 FAA figures there are 1,509,617 drones registered in the USA, 420,340 commercial drones registered, 1,085,392 recreational drones registered and 160,748 remote pilots certified. While USS companies will already have established relationships with this community how will they define their own unique selling points over their competitors?

As the FAA will not provide payment for the development or operation of Remote ID USS products or services it anticipates that “the Remote ID USS would recoup the costs of providing services either through the sale of subscriptions for remote identification services, online advertising, or “value added” services that can be purchased from the service provider.” But which added value services and would these be produced by the USS or in partnerships?

The proposed rule would require persons operating UAS with remote identification to transmit the remote identification message elements to a Remote ID USS over the internet. For most USS this is not a technical problem. But it becomes a business issue as the FAA appears to require UTM to be based on increasing numbers of scalable, certified telecommunications services (“The FAA anticipates that in the future, third parties may develop mobile phone applications for law enforcement use…the FAA anticipates that some UAS manufacturers will also be Remote ID USS. In those cases, the Remote ID USS may choose to only connect to UAS made by the same manufacturer. This model is similar to how mobile telephone networks sell devices that can only be used on their networks. The FAA requests comment on whether manufacturers should be permitted to produce UAS that are only compatible with a particular Remote ID USS).

This could give internet service providers/mobile phone operators a stronger-than-originally anticipated bargaining chip in the USS/connectivity company partnership as the technical criteria demanded by the FAA for establishing this service is likely to be rigorous and beyond the scope of many UTM service providers, especially when the added potential benefits of 5G are taken into consideration. Also, there will need to be clear dividing lines drawn between commercial telecom drone-based services (for streaming drone-based videos and data analysis, for example) and regulated services. Or will there?

This needs to be examined in more detail with the FAA as there is no clear indication yet how this might be financed or how the costs might be recouped. Given the security issues involved and the requirements of security services to have instant and reliable data on rogue drones it would be unusual to leave this service entirely to the market.

Unmanned Airspace contacted ten UTM service suppliers and related associations for their comments on the NRPM. Here are some early replies:

“The proposed rule is a step in the right direction and since it includes both network and broadcast based capabilities, it makes it more practical,” said Amit Ganjoo, Founder and CEO ANRA Technologies and former co-chair for FCC’s Technical Advisory Council (TAC) for 5G and IoT. “The three-year implementation period is unnecessarily long and it will put a dampener on the development of the UAS industry in the US.”

According to Chris Kucera, Head of Strategic Partnerships for OneSky and one of the members of the FAA’s Aviation Rulemaking Committee. “This Remote Identification (RID) rule has been in the making for several years since the FAA Aviation Rulemaking Committee (ARC) commenced in Washington, DC to get industry consensus on technology and implementation concepts for remote identification of drones in operations. Over 70 organizations representing hundreds of companies supported the ARC. RID is one of the most important technologies needed to move the commercial Unmanned Aircraft System (UAS) industry forward. Up until now, drone operators have been flying without a mechanism to identify themselves to the general public and law enforcement. Other industries have markings; cars have license plates, manned aircraft have tail numbers and electronic transponders, ships use similar visible markings as well as the Automatic Identification System (AIS). These markings allow the public to gain confidence in the vehicle operation. Remote identification technology aims to solve this problem using electronic marking, both broadcast and networked through UAS Traffic Management System (UTM) Service Suppliers (USS).

“We are encouraged to see a draft rule on remote identification. In the FAA’s rulemaking committee, we debated about technological approaches and thresholds for where this rule should apply. We applaud the FAA for taking our suggestions and improving on them. We think the use of both broadcast and network UTM technology within a separated group of use classes for “standard” and “limited” type drones is a great idea. In addition, hobbyists can still use designated airfields to fly their drones without needing to comply. Over the next 60 days, we will hear from various industry organizations either showing support or criticizing the rule. I hope as a community we will understand that drone identification is necessary to support safe and secure operations and the cost to do so will be minimal. Furthermore, the growth of the drone industry depends on RID. Without this technology, drone operations will be hindered, and the industry  will not be able to grow.”

“AirMap applauds the FAA’s draft Remote ID rule,” according to a statement sent to Unmanned Airspace by the company. “It validates our core belief that the only way drones can operate at scale is if they all participate in a UTM system.  Remote ID is critical to airspace safety and security. It allows drone operators, government authorities, law enforcement, and the general public to know which drones are flying where. This is important because it provides visibility and fosters a collaborative ecosystem for high-scale operations. When operators share their position and identifying information via a UTM system, they can safely fly in proximity to one another. This information-sharing will ultimately enable beyond-visual-line-of-sight flights and autonomous operations.  AirMap has developed a Remote ID capability and is trialling it in collaboration with industry partners. AirMap has also been an active contributor to the development of an industry-wide standard for Remote ID and Tracking. In July 2019, ASTM International defined that standard: ASTM WK65041. The standard is the result of a consensus among 35 regulatory and industry organizations to provide a flexible and scalable way to remotely identify drones while protecting operator privacy. We hope the FAA expedites implementation of the rule.”

“AiRXOS has been advocating for Remote ID through our participation on the Remote ID Aviation Rule Making Committee (ARC), the Commercial Drone Alliance (CDA), and our contributions to the ASTM F38 Remote ID standard working group,” according to a company statement. “While there is room for improvement, the overall approach is sound and will be a key enabler for the growth of advanced drone operations and aerial mobility at large while respecting the rights of private citizens and drone operators. We are pleased with the scope of the proposed rule, covering all drones greater than 0.55 lbs, which is appropriate since all drone larger than that can be a threat to people and property in the air and on the ground. There is also a significant carve out for model aircraft operations in FAA-recognized identification areas. The nature of the limited remote ID category will also be simple to achieve for recreational and VLOS commercial drone operations using mobile phones connected to controllers. AiRXOS is developing our Air Mobility Platform USS to be a Remote ID USS compatible with the final rule to serve our customers. We’ve already demonstrated network Remote ID, similar to what’s require for both Limited and Standard Remote ID in the NPRM, with seven other industry partners during a demonstration in San Bruno, CA in September of last year. We also plan to show off our remote ID implementation during the FAA/NASA UTM Pilot Program Phase 2 this summer. AiRXOS will be providing comments on the NPRM to address some technical shortcomings and necessary clarifications; we support the overall approach proposed by the FAA in the NPRM and look forward to its rapid adoption. We’ve already waited too long for this NPRM and its adoption is holding up advanced operations of our customers.”

According to Tom Walker of DroneUp (https://www.unmannedairspace.info/commentary/the-faas-remote-id-rid-nprm-87-pages-of-mostly-common-sense-88645-words-of-seemingly-good-intentions-one-unnerving-blind-spot/)  “The future viability of our industry hinges on the very capabilities that RID will supposedly enable: BVLOS and flight over people. If that is accurate, I am extremely “Pro-RID.” RID is paramount to the successful mass integration of drones into the NAS. Also, nobody can argue that the ability to identify the “good guys” and the “bad guys” is not necessary for the greater public good. I sincerely applaud the general effort put forth by the stakeholders who contributed to the published proposed version. But let’s be clear; this was not written to promote or protect dedicated commercial drone operators or the service providers whom they support.” And: “…the location of the drone and its “unidentified” operator may be provided publicly… in real-time. This is not only unnecessary, but it is also dangerous. It puts professional, responsible drone operators at an even higher level of risk.”

Unmanned Airspace will provide more analysis and information on this issue over the coming weeks as more detailed comments are gathered.