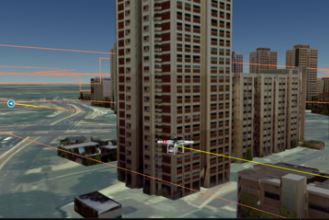 “These tests were the first live flights at an FAA designated UAS Test Site validating NASA Technical Capability Level 4 and the USS to USS integration protocol. When completed, the tests will confirm OneSky’s ability to enhance the safety and efficiency of unmanned flights conducted beyond visual line of sight (BVLOS).

Also included in the tests is Measure, a Washington DC based drone-as-a-service company and NUAIR Partner AX Enterprize.

OneSky reports it has participated in the NASA UTM effort since 2015 and recently completed Technical Capability Level 4 (TCL4) UTM testing. In addition to being a USS, OneSky is providing NUAIR and other USS with access to its Supplemental Data Services Provider (SDSP) analytics such as terrain analysis, modelling of communications link quality, and navigation accuracy forecasting, all which help to ensure safe UAS operations across the flight route. In addition, NUAIR has implemented AGI’s Test and Evaluation Tool Kit (TETK) software to improve the rigor of the New York UAS Test Site’s testing process, helping to quickly deliver actionable insights from the UAS test flights.

“The ability for Multiple UAS Services Suppliers to communicate with each other is another key element in implementing a UAS traffic management system that can facilitate beyond visual line of sight commercial operations,” said Tony Basile, chief operations officer at NUAIR. “OneSky has differentiated themselves by demonstrating their ability to deliver robust UTM capability to support BVLOS and urban operations. We especially appreciate the analytical depth of their software as well as their exceptional support. Their experience in delivering enterprise-ready software led to a successful and timely implementation.”