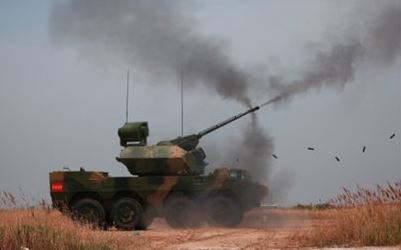 The Global Times reports a new self-propelled anti-aircraft gun has been used during an exercise conducted by the People’s Liberation Army (PLA) Army Academy of Artillery and Air Defence. The gun is likely equipped with an electro-optical aiming system that can send 35 millimeter shells to accurately intercept targets in the air, including drones and cruise missiles, according to Wei Dongxu, a Beijing-based military analyst, quoted in the paper.

According to the newspaper report:” the technology has now matured and the weapon might have already been commissioned into the Chinese military. One of the highlights of the weapon are its wheels, which enable the new self-propelled anti-aircraft gun to have higher mobility compared to those that are already in the PLA service and use tracks, and are more suitable for off-road operations, Wei said.”