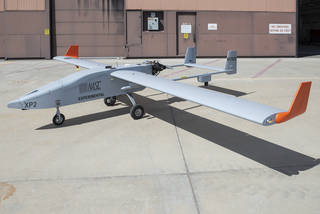 NASA has begun its final series of test flights for the project, known as Flight Test Series 6 (FT6), at NASA Armstrong Flight Research Center in California as part of its work to assist the Federal Aviation Administration (FAA) develop regulations to allow the integration of unmanned aircraft systems (UAS) into the National Airspace System (NAS).

The UAS Integration in the NAS project is managing the three-monthlong flight tests that are scheduled between September and November 2019.

According to NASA, FT6 will focus on low size weight and power (SWaP) sensors for Detect and Avoid (DAA) operations in controlled airspace to inform the FAA through the RTCA Special Committee DAA Working Group on the phase 2 minimum operational performance standards for DAA and air-to-air radar.

FT6 will use the TigerShark Block 3 XP, a NAVMAR Applied Sciences Corporation (NASC), Group 3 UAS with a wingspan of 21.9 feet for the final test series. The TigerShark features a payload capacity of 95 lbs. and a maximum endurance of 12 hours. The TigerShark XP has been modified with a unique smoke system to help intruder aircrew visually acquire the aircraft during flight tests and a nose structure to integrate Honeywell’s radar system. The Digital Active Phased Array, or DAPA-Lite radar system, is a new technology compared to previous flight series.

The radar system consists of three small radar panels whose radar beams can be electronically steered to point in different directions without the need of moving antennas. The three panels are arranged to provide a wide horizontal field of view.

“The radar system is cutting-edge technology with panels small enough to be carried on a smaller UAS, but still have enough range to see and avoid other aircraft,” said FT6 DAA Principal Investigator Michael Vincent. “Our goal for FT6 is to challenge the effectiveness of our DAA system and Honeywell’s radar system as we develop performance standards of unmanned aircraft being integrated in our national airspace system.”

A primary objective for the project team is to characterize Honeywell’s DAPA-Lite radar to determine its effectiveness and its range and accuracy. The team will be testing what the radar can actually detect with its low size weight and power radar system. The DAPA-Lite radar will provide the data to the DAA system to determine the distance, bearing and elevation between the UAS and other aircraft. The DAA system will then use the information from the radar system to determine which flight path to take to maintain safe separation.

FT6 will help establish the minimum operational performance standards for DAA systems for UAS in the NAS. The system must alert the pilot in a timely manner when a conflict occurs and determine which display elements the pilot needs to be aware of in order to guide the TigerShark away from potential danger.

Three intruders will be used during the flight tests each representing a different common size aircraft that a UAS may encounter in the NAS, the King Air B200, T-34C and TG-14 Motor Glider.

Some flight tests will require an intruder aircraft to fly on the same path head-on toward the TigerShark with a safety separation buffer. This particular encounter will demonstrate the effectiveness of the DAA alerting system and what type of guidance it will recommend to avoid the intruder.

Each full mission encounter flight will feature a different pilot that is naïve to the FT6 objectives and encounters to gather accurate data on how a pilot will react and respond to the systems. Pilots will fly a simulated UAS mission and interact with an air traffic controller and other traffic (live and virtual) in the airspace. The pilot will be tasked with using the DAA system to avoid live aircraft that the DAPA-Lite radar detects.

“Every decision we have made for FT6 was a result of what we have learned in previous flight tests,” added Vincent. “Our journey through each flight test series has been instrumental in the hopes of allowing unmanned aircraft to enter unsegregated airspace in the near future. FT6 will be a big factor on how we can safely integrate unmanned aircraft.”