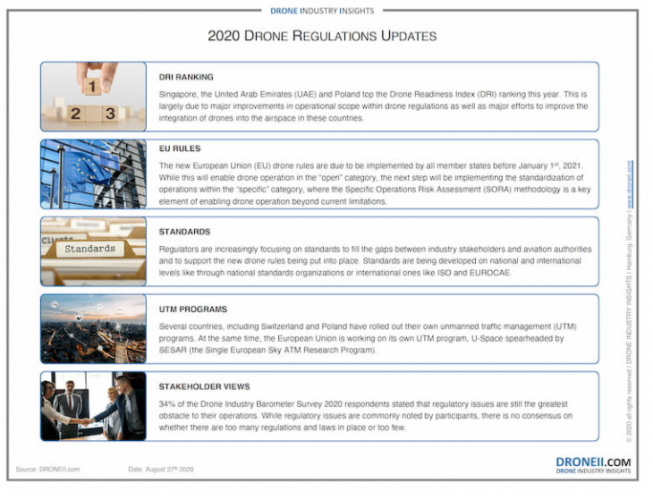 The latest Drone Regulation Report published by DRONEII says the global health pandemic is impacting the drone industry, driving up demand for automation and consequently the need for permissions.  Special permissions are only a small step compared to standardisation of through comprehensive regulations and COVID-19 is helping integration of drones into airspace especially in urban and suburban areas that are currently heavily restricted, according to the report.

According to DRONEII, the Drone Readiness Index has changed with the introduction of five new countries (Austria, New Zealand, Nigeria, Poland and South Korea) into the ranking.

Singapore tops the ranking, having developed their operational scope significantly by making non-standard operations (beyond the visual line of sight – BVLOS, in controlled airspace, etc.) possible through standard Specific Operations Risk Assessment (SORA) methodology. Meanwhile, Poland – a new addition to the ranking – has come second in the DRI, largely due to their increased airspace integration efforts and stakeholder involvement in those. Finally, the UAE has come in third thanks to the significant advantages they present within administrative infrastructure, more specifically the prominence of e-governance.

January 2021 is the deadline for member states to officially implement the new EU regulations, making drone operations in the “open” category possible. While BVLOS flights will now be accepted by using standardized operation scenarios, the next step will be the implementing of “specific” category, where the SORA methodology is a key element of enabling drone operation beyond current limitations and across internal EU borders.

DRONEII says authorities are increasingly focused on standards. Drone rules and regulations are immensely difficult to implement successfully without standards. These involve standards on drone platform manufacturing, as well as standards vis-à-vis drone operations. The role of standards is largely to fill a gap between the industry powering ahead with new technology and the aviation authorities looking to keep drone operations safe and their integration into the airspace smooth. Which standards are currently being developed, by whom and for what aim is further described in the Drone Regulation Report 2020.

Airspace integration has become a major focus for drone regulators across the globe. From the new Swiss U-Space (SUSI) UTM program, to Poland’s UTM program and major developments across China, Japan, USA and Australia (among others), governments have recognised that they need to build systems to maintain, facilitate and monitor drone traffic.

Through increased private-public cooperation and with the introduction of new UTM initiatives across at least 12 countries, the drone industry is preparing systems of future traffic communication in the airspace in order to avoid collisions as more platforms enter the airspace.

UTM programs, in fact, are not only the focus of national governments as the European Union (EU) have also rolled out an EU-wide UTM project called U-Space which will enable communication between drones in an integrated system across European borders. U-Space is already considered within the EU drone regulation framework with the publication of Opinion 01/2020 (a regulation recommendation by EASA to the European Commission) for a high-level framework of U-space requirements.

While the COVID-19 pandemic has helped simplify drone operation application procedures in some countries, this year’s Drone Industry Barometer again revealed similar attitudes to last year. Over 35% of companies who participated in the survey stated regulatory issues as their main obstacle to drone operations. Overall, companies remain most concerned about restrictive regulations as well as inconsistent regulations across countries which impacts their abilities to expand globally.