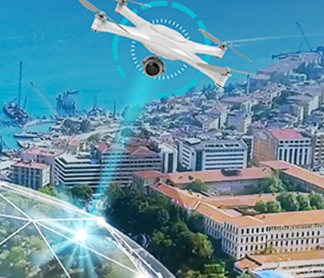 France’s Armed Forces Ministry is to evaluate the development of a drone interceptor called Deeplomatics that proposes a surveillance network supported by artificial intelligence algorithms, according to a report by published by Opex360.

According to the article:

“The Defense Innovation Agency [AID] is financing several projects including Deeplomatics. This HEMISPACE project is led by the French SME Lerity, an optronics specialist, in cooperation with Inpixal, for image processing.

“The main objective is to have a demonstrator intended to validate the performance of the innovative HEMISPACE optronics concept by 2024,” says AID. Or before the Olympic Games in Paris. The challenge of this project is to improve the detection of drones in a “complex environment” such as the urban environment, knowing that current systems use electromagnetic devices likely to be disturbed.

“The innovative aspects relate firstly to the definition and distribution of detection channels and secondly to the two-level architecture of real-time detection and filtering processing,” explains AID. Concretely, it will therefore be a question of evaluating the demonstrator of a hemispherical optronic detection system of mini/micro drones, whether they evolve alone or in a swarm, in an urban environment and at distances greater than 1 km, it is to say “where electromagnetic means are sometimes less easy to implement”.

“This demonstrator will consist of two HEMISPACE systems. The first, equipped with “six channels”, will first be used to validate the performance of the optical detection, tracking and filtering algorithms in 2 dimensions. Then it will be associated with a second, equipped with three color channels in order to “evaluate its interest for the function of threats”. This will also make it possible to “validate, by providing distance information, the performance of the 3-dimensional filtering intended to […] reduce the rate of false alarms”, details the AID.

“Depending on the results, this system could be deployed “in all situations requiring the rapid deployment of a protection bubble, but also for the protection of critical infrastructure: airports, institutions, industrial and sports facilities”. It should be noted that Lerity believes that it would also be likely to participate in the “perimetric protection of surface ships”.

But according to the AID, it would be possible to extend the surface of an area to be monitored by networking several HEMISPACE modules. “Indeed, each module, based on a secure proprietary protocol, must make it possible to compile and correlate the output data of another module to expand the protection bubble,” she argues, concludes the article.