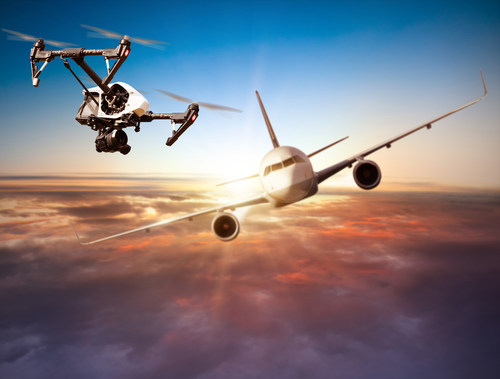 “There is currently no defined path for the integration of manned and unmanned aircraft in uncontrolled airspace, i.e. the airspace in which users are not mandated to use air traffic control services. One of the greatest challenges is that there are presently no adequate technologies (or spectrum) for users to make themselves visible (i.e. transmit electronically their identity or location). As long as there is no international consensus on how this should be worldwide implemented and addressed, situational awareness of all drones and manned aircraft will not accommodate complex drone operations such as BVLOS and autonomous flights.”

This is one of many challenges highlighted by fifteen aviation associations – including Airlines for Europe (A4E), Airports Council International Europe (ACI EUROPE),  Air Traffic Controllers European Unions Coordination (ATCEUC), Civil Air Navigation Services Organisation (CANSO), European Business Aviation Association (EBAA) and the European Cockpit Association (ECA) – as part of a new campaign called “We are all one in the sky” to facilitate the integration of drones in very low-level airspace (i.e. below 500 ft) and preserve the high level of safety in the entire European airspace.

The campaign has been formed to accelerate the implementation of the following measures: Extensive public awareness campaign, Mandatory training and certificate/license relevant to operations, Airport protection from drone intrusions, incident reporting, increased effectiveness of enforcement, improved situational awareness of all manned aircraft and the introduction of traffic management for drones – UTM/U-Space – along with further research.

“Our common and primary concern are drones flying at low altitudes near airports and helicopter landing sites that could threaten aircraft taking off or landing,” says a campaign statement. “Regulation must be in place for countermeasures and a safety case must be produced to determine the level of ‘power’ given to the security forces. It is essential to clearly define the roles and responsibilities of each stakeholder (e.g. airports, air navigation service providers and authorities) with regards to the detection, identification and neutralisation of drones.

“Members States must ensure that all drones operate within clearly defined and known limitations taking into account existing/traditional aviation procedures. Enforceable and strict legal and/or administrative sanctions must be ensured in each State when users of drones endanger aviation by violating the existing rules.”

“Everyone, including non-involved persons, should be able to report such occurrences based on a non-punitive system, similar to the philosophy of Just Culture. It is paramount to convey to operators, legislators and general public that the focus is improvement in safety levels through safety investigation and learning from these occurrences, and not to pass blame. An easy-to-use reporting system should be available for this purpose. For maximum safety it should facilitate the use of existing reporting lines/databases and be harmonised across Europe.”

And the campaign also calls for additional research to take place on essential areas like contingency procedures, geo-fencing, surveillance, ATM-drone pilot communication and impact of collisions between drones and all types of manned aircraft.