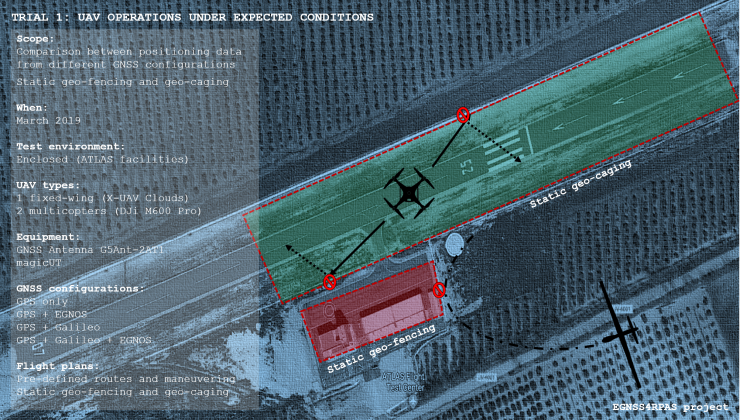 The following article has been supplied by VVA, edited by Unmanned Airspace

A consortium of VVA, GMV and CATEC has been appointed by the European Commission’s DG GROW to provide support to the standardisation actions for European global navigation satellite systems (EGNSS) – EGNOS and Galileo – in relation to drone operations. The project is a contributor to the U-Space Network of Demonstrators set up by the European Commission and will run until the end of September 2019. The project was recently presented during the 2019 edition of the World ATM Congress, where several other EC and GSA funded drone projects were showcased.

Under the frame of this project, the Consortium will perform and analyse the results of three dedicated test trials focusing on different aspects of drone operations to understand how European GNSS can play a role in a safer and more efficient deployment of UAVs in real-life scenarios. The first two trials will be undertaken in an enclosed environment at the ATLAS (Air Traffic Laboratory for Advanced unmanned Systems) facilities located in Villacarrillo, Jaén, Spain, while the third one will be in Villacarrillo’s urban environment.

Each flight trial will exercise several stress conditions such as leaving the multicopters in a fixed point, having all UAVs fly in an eight-shaped trajectory and flying the UAVs close or between the ATLAS Testing Facility’s buildings or in the urban environment to analyse the potential satellites’ loss in the navigation solutions. On top of these trials, the accuracy performance of the different GNSS systems for geo-fencing and geo-caging, either static or dynamic, will be put to the test. The outcomes of the trials will contribute to standardization efforts carried out by EUROCAE WG-105 and ASD-STAN D5/WG8, such as the “GNSS Guidelines for UAS”, or the geo-fencing and geo-caging MOPS being developed by EUROCAE.

The first trial took place on the 19 March and involved a fixed-wing drone and two multicopters. The drones were equipped with a multi-band GNSS antenna compatible with L1/L2 and L5, Galileo, GPS/EGNOS and GLONASS. The main objective of this trial was to map and compare the positioning solutions computed with different GNSS systems to analyse the added value of EGNSS in UAV operations. Following the successful trial, the analysis of the results is ongoing, and these will be presented in an upcoming article.

For the second trial, taking place on the 23 and 24t April, one fixed-wing drone will be equipped with a multi-band GNSS antenna for the various tests in VLOS and BVLOS. Prior to the trial a SORA Risk Analysis will be performed followed by simulation of dynamic (on/off triggering) geo-fencing and geo-caging demonstrations as well as a scenario where the UAV loses the Command and Control link and needs to return to the Reference Point. The third trial will take place on the 25 and 26 June, involving a single MultiCopter. This final test will be executed in the urban environment of Villacarrillo, putting the UAV in a more demanding environment.

At the end of the project, a technical brochure with the main findings will be published.