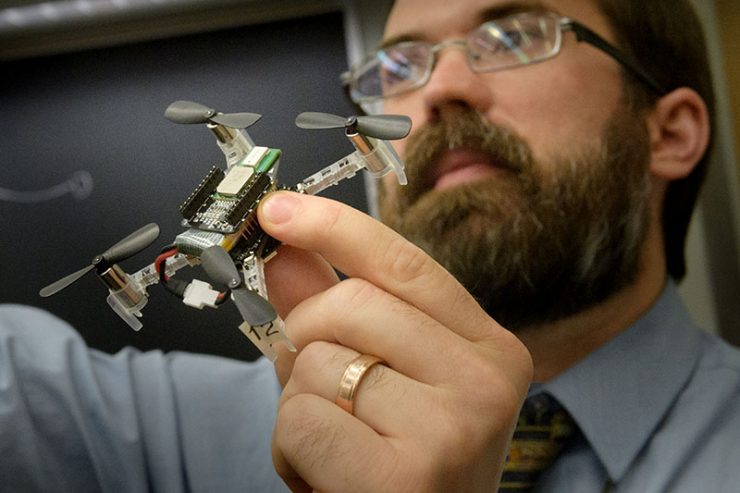 Researchers from Purdue University, Indiana, have been tasked to make sure drones and their systems could operate securely, safely and efficiently in the United Arab Emirates capital, Abu Dhabi. Inseok Hwang, a professor in the School of Aeronautics and Astronautics, is principal investigator on a three-year, USD2.3-million grant from the Technology Innovation Institute in Abu Dhabi to study the application of secure drone swarms in urban environments.

According to the Purdue press release, the project will use the UAS Research and Test Facility at the University, a 20,000-square-foot, 35-feet high facility, located at Hangar 4 of the Purdue University Airport equipped with a large indoor motion capture system and unique research capabilities.

Abu Dhabi has intentions of making the city a leading hub for technology and innovation in the Middle East. Part of that evolution is utilizing unmanned aerial vehicles (UAVs), or drones, to assist with as many tasks as possible, from delivering packages to aiding in police operations to helping investigate crashes on highways to delivering high-value transports, like organs for transplant.

With autonomy, though, comes risks of hackers and complications between interacting agents.

The project requires expertise in autonomous vehicles, control, sensing, virtual reality and security. James Goppert, a visiting assistant professor in the School of Aeronautics and Astronautics and managing director of the UAS Research and Test Facility, and Dongyan Xu, the Samuel D. Conte Professor of Computer Science and director of CERIAS (Center for Education and Research in Information Assurance and Security), Purdue’s cybersecurity research and education center, are co-principal investigators on the project.

“We will address this problem in a highly integrated, interdisciplinary way,” Hwang said. “We will consider it from the program level to the high-level network of systems, so we accomplish the hierarchic way from the very detailed lower level, the software and hardware level, to the large network of vehicles and from the single vehicle to multivehicle. So it’s multidimensional. That’s one of the unique pieces of this project.”

Goppert will build a mixed reality environment, combining a virtual reality urban environment with a scaled physical model of the city. The drones will fly and navigate the city, and the environment can be programmed to simulate a wide range of settings, including weather, traffic and urban development, to test the drones’ applicability and agility. The testing will be done with single vehicles as well as swarms, which could include 10 drones.

“Our unique capability is that we have such a large environment to do it,” Goppert said. “Just running so many vehicles at once is going to be a challenge. In the past, several vehicles have been used. But if we’re going to be running swarms where each vehicle needs a rendered virtual mixed reality image, that’s going to be really computationally challenging. That’s what we’re pushing forward.”

Hwang and Xu will have a multitiered approach from the cybersecurity and robustness standpoint. Xu will investigate from the cyber perspective of security, encryption, authentication and peer-to-peer communications. Hwang will develop a mathematical model and use the control theoretical solution approach, assessing potential cyberattacks on the systems and working to design a controller in such a way that the system becomes more resilient to attacks.

Ultimately, all of the research will be integrated and pieced together around the state-of-the-art test bed, which could happen toward the end of the second year of the three-year grant.