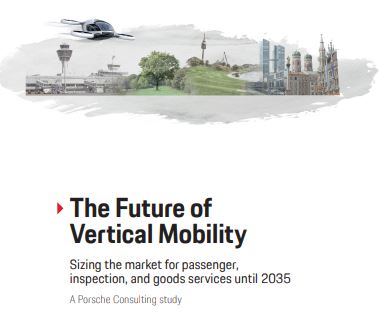 According to a new study on urban air mobility by Porsche Consulting: “We expect electric passenger drones…to start providing commercial mobility services in 2025…Within one decade after that, by 2035, drones could already be servicing their own elaborate passenger network with about 23,000 aircraft plying major routes and creating a market worth USD32 billion,”

“Passenger drones will for some time remain a hub-to-hub travel option that depends on other modes of transportation, rather than an end-to-end solution. Looking at unmanned eVTOL aircraft, the market for inspection drones will grow to USD34 billion and 21.5 million active units by 2035, complemented by the market for goods-and-delivery drones at USD4 billion and 125,000 units. Inspection drones are in use today, and goods drones are already being tested around the world. The market for supporting services around inspection, goods, and passenger drones will reach another USD4 billion by 2035.”

“We expect commercial passenger transport to remain a highly regulated market that will remain under the guidance of the two globally preeminent regulatory agencies: the FAA in the US and EASA in Europe….Starting with existent and stable systems, incremental certification will address distributed electric propulsion (DEP) and, later, “sense-and-avoid” technologies and device autonomy. Further legal issues revolve around airspace and traffic management. How will eVTOL aircraft deal with various weather conditions and how will they sense and avoid other aircraft? Will they use centralized or decentralized communication channels? How will the airspace of tomorrow be structured to accommodate regular aviation and drones? One of the drivers in this regard will be the safety of traditional aircraft, as the number of inspection and goods drones will rise into the millions.”

“Until 2025 we expect that batteries using today’s conventional lithium-ion (Li-NMC) will be able to achieve a density of up to 300 W h/kg. Assuming an available charging rate of 2C to 4C….batteries can be charged to 80 percent capacity in 15 to 30 minutes, thereby only achieving a short lifespan of 500 to 700 cycles.

“The generally accepted risk models for hobby drones (10-5) imply that 23,000 passenger drones clocking close to 50 million flight hours per year would translate into one critical (not necessarily fatal) incident every second day, which is clearly not acceptable. A lot will hinge on whether people perceive drones as bringing benefits to all parts of society. Deploying them for search and rescue operations and government security can have a positive impact on demonstrating the mass suitability of eVTOL aircraft. Over time, these systems should prove that their benefits outweigh the costs, ushering in broader passenger mobility services. The public should also rightfully expect laws to define appropriate clearance above private property to prevent privacy violations. Additionally, there is a clear need to develop suitable safeguards for network security that allow remote pilots to override the on-board pilot in an emergency and prevent remote misuse, such as a terrorist taking over a eVTOL aircraft.”