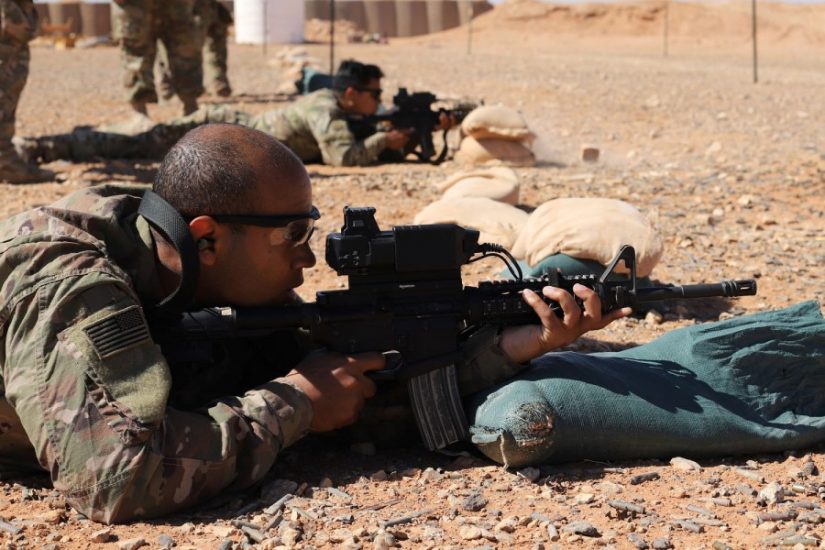 The DroneGun and the DroneKiller each use electronic warfare capabilities to neutralize a drone threat while the rest rely on kinetic measures to defeat unmanned systems, Michael DiGennaro, the JCO’s acquisition and resourcing division test team lead, told reporters in a September 24 briefing. Both hand-held systems did “effectively engage the targets that were presented to them,” he said.

Flex Force’s offering uses a 7.62mm round, while the Smash Hopper uses a 5.56mm round that is fired from a regular handheld weapon that would deploy with a soldier, DiGennaro said.

Northrop’s proximity round was fired from an XM914 chain gun already in the Army’s inventory. The rounds are capable of detecting an approaching aircraft, and as the aircraft comes within range, the round explodes and the craft, flying through a cloud of debris from the explosion, is taken down.

“Ground-Based Aerial Denial is defined as solutions that are ground-launched with no inflight terminal guidance, providing denial or defeat of single or multiple sUAS,” as explained in the May request posted to a federal contracting website. The solution should not include ground-emitted cyber or electronic attack through radio frequency waves, the request for information added. Systems should cost less than $15,000 per drone engaged, the JCO said according to Defense News.

For a hand-held capability, the office wanted something that can be held, attached to a weapon or user while conducting dismounted operations, and weighs less than 24 pounds. Systems should cost less than USD37,000 per unit.

The JCO may award prototype projects following the demonstration and a review of capabilities, the request noted. The office plans to complete demonstration evaluations within 30 days following the event and will notify companies if they are chosen for a possible prototype award. If a prototype effort is successful, companies may be selected for follow-on production contracts without further competition, the RFI stated.

Because the systems demonstrated at the event are still undergoing research and development, not everything went perfectly and there were “varying results” for the systems during standardized threat scenarios, according to Chief Warrant Officer 3 Judson Brant, who works with the RCCTO. In some cases, if a system struggled earlier in the week, it was able to improve later on or was allowed to demonstrate a capability by stepping outside of the standardized scenarios, he noted during the press briefing.

“Like any time you’re doing testing with equipment that is still in research and development phase, there’s going to be some trial and error and optimization that needs to be done along the way,” Col. Greg Soule, the JCO’s acquisition and resources director, said during the same media engagement. “There’s some integration challenges that are being worked through, and when one company saw a challenge early in the week, they probably surmounted that obstacle by the end of of the week in some cases,” reports Defense News.

The September demonstration is the second effort in a campaign to bring the best counter-small UAS technology into an enduring solution. The JCO was established in late 2019, and the defense secretary at the time delegated the Army in November 2019 to lead the effort to review c-sUAS, many of which were rooted in urgent Middle Eastern conflicts, and consolidate capabilities into a select group of interim systems. Pentagon leaders in late September 2020 approved a set of requirements to help counter small drones, laying out a path for industry to develop technology to plug into a single command-and-control system.

The JCO already chose an interim set of capabilities to counter small UAS from a poll of 40-plus systems, but it is rapidly working to stay ahead of the threat curve through the development of its future c-sUAS system architecture. The first demonstration, also held at Yuma in April, looked for low-collateral effects interceptors. Three teams are under evaluation as a result of this USD Air Force effort, according to Defense News.

The demonstrations are expected to take place twice a year, during which the joint force will examine the most impactful solutions that fill current capability gaps and are ready for a transition into fielded systems.