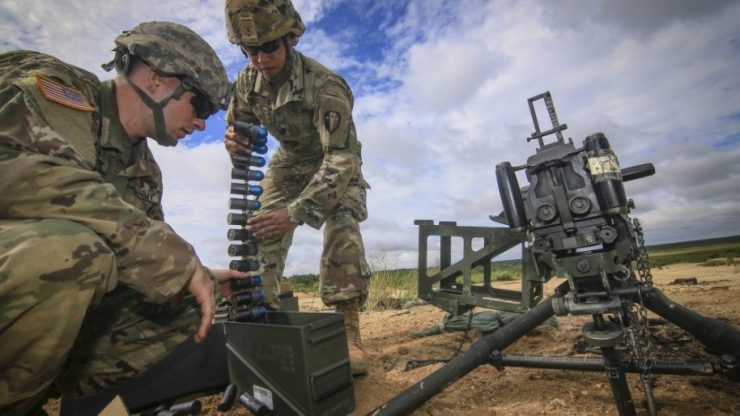 UAS Vision and Techlink report that US Army researchers have packed a net into a 40mm grenade to take down enemy drones. The new invention, recently patented, comprises net strings packed under a proximity detector which detonates a small charge, springing the 40mm grenade apart and spreading the net out six to nine meters from the target.

“As the round nears the target, a signal from a control board activates a servo. The servo pulls on a central lock plunger to release a ball mechanism. This releases the ogive section, which in turn allows the ejection spring means to eject the petals and weights along with the net stowed there within,” according to the patent

The new warhead was invented by Tomasz Blyskal, Richard Fong, and LaMar Thompson of the Armament Research, Development, and Engineering Center at the Picatinny Arsenal in New Jersey. According to TechnLink: “Initial testing showed that their round outperforms other net-centric counter-drone tactics like dragging a net from another larger drone, according to the Army, because that requires trained pilots and doesn’t work when trying to “ensnare many, or swarms of drones”….Small, mobile ground units already include grenadiers equipped with M320 launchers who could easily carry dozens of the new 40mm rounds to take out small drones from hundreds of yards away. Cavalry units, anti-tank sections, and heavy weapons companies that employ the Mk-19 grenade launcher could also use the new round from even greater distances.

TechLink is a Department of Defense partnership intermediary for technology transfer, through which DoD inventions are made available to businesses and entrepreneurs for use in new products and services.” TechLink is a center within Montana State University’s Office of Research and Economic Development and serves as the university’s main outreach arm to the high-tech sector in the state, region, and nation.”