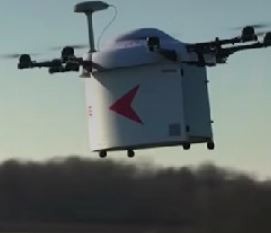 Drone Delivery Canada (DDC) is to launch its 180 kg capacity Condor cargo drone along with integrated FLYTE flight management system for beyond visual line of sight (BVLOS) operations on 19 February.

“The Condor has been in development for the past year and is the next generation in DDC’s drone delivery cargo aircraft,” says the company. “With a payload capacity of 180 kgs, and a potential travel distance of up to 200 km, the Condor pushes the limits in both cargo capacity and distances. The Condor is powered by a next generation gas propulsion engine.”

“We are very excited to unveil the Condor to the public”, said Tony Di Benedetto, CEO of Drone Delivery Canada.  “The global application for the Condor is virtually limitless. As such, the Condor is a big part of the future of DDC’s commercial operations. Having the ability to move heavy cargo long distances is a significant milestone for us that opens up many potential commercial opportunities in both Canadian as well as international markets.”

The Condor, which has a wing span of approximately 20ft., and is capable of vertical take off and landing, is equipped with DDC’s proprietary FLYTE management system which is the same platform utilized in all of DDC’s cargo delivery drones. This is also the same management system that was utilized in the fall of 2018, during operations in Moosonee and Moose Factory, Ontario in support of Transport Canada’s BVLOS pilot project.

“Our FLYTE system is Drone agnostic, meaning we can embed our technology into any airframe. In this instance, we have embedded our drone delivery technology into the Condor, providing flexibility and cost savings.” commented Paul Di Benedetto, CTO of Drone Delivery Canada. DDC will be working closely with Transport Canada to secure the necessary approvals to begin flight testing the Condor in Q3 of 2019.