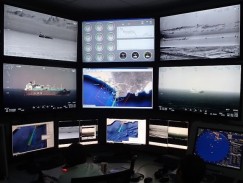 Germany’s air navigation service provider DFS and defence company Rheinmetall, have tested a counter-UAS airport protection system “that could be highly automated, connecting existing air traffic data with advanced radar systems, acoustic and infrared sensors and optical equipment to first detect possible intruders, and then neutralize them with other drones,” according to news agency Reuters,

Rheinmetall makes a number of different sensor and command-and-control C-UAS systems including the C2 Software (pictured) which “enhances the decision making process by filtering, correlating and processing data from all sensors, providing the operator with one comprehensive and common operating picture,” says the company. “Features such as automatic threat detection, sensor slewing and target tracking have also proven to be key enablers for quick reactions and optimum decision making to counter the threat.”

In a demonstration on 6 February , hosted by the German military’s Technical and Airworthiness Centre for Aircraft (WTD61) 50 km north of Munich, a “good” drone “threw a net over a potentially threatening one, taking it to the ground,” said the news report. “Matthias Diem, head of strategy for Rheinmetall’s air defence and radar systems business, said it would take time, testing and certification before any such system could be deployed, and it was uncertain what it would cost. But he said the experiment offered promise.”