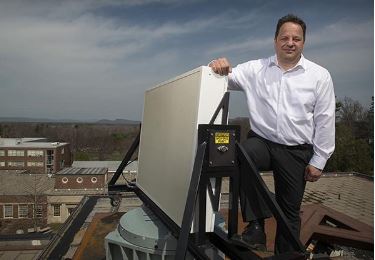 Researchers at the University of Massachusetts Amherst College of Engineering are developing a multi-purpose radar system that can detect very small drone aircraft and also serve as a severe weather warning system for airports and urban settings. The system is designed to scan the airspace closest to the ground where drones and severe weather are not currently visible to existing weather radar and aircraft surveillance systems. The project is funded with an 18-month, USD 200,000 grant from the National Science Foundation.

Michael Zink, associate professor of electrical and computer engineering and co-director of the Center for Collaborative Adaptive Sensing of the Atmosphere (CASA), says that CASA researchers have already demonstrated that a dense network of short range radars can be used to track tornadoes down streets and anticipate areas where flash flooding might take place. “With this new grant, we want to show that we can use the same system to also monitor the airspace for low flying drones that might breach secure facilities or threaten public safety,”says Zink.

“We believe that a radar based detection solution will provide the earliest warning of drone intrusions,” says Apoorva Bajaj, innovation manager at CASA.

CASA has developed and deployed an array of seven short range weather radars in the Dallas-Fort Worth area of Texas that are capable to seeing severe weather such as tornadoes that form close to the ground to provide public officials with timely and highly accurate storm information. The system is being used operationally by 50 cities and counties in the region and a mobile app developed by CASA delivers severe weather alerts based on user preferences and location.

Since drones can move at very high speeds compared to weather, the researchers plan to use phased array antennas, capable of using multiple radar beams to scan the atmosphere.  A second key aspect of the system is that it uses dual polarization technology that could help distinguish between hard moving targets such as drones and birds and their flight patterns and also helps specify the types of precipitation that is in the air.

Bajaj says one of the goals of the project is to develop a library of information on what different objects look like. “We will collect the radar signatures from different types of drones and from other objects such as birds,” he says. These can be used to develop algorithms that will help the radar quickly and accurately identify objects moving in the air space, he says.