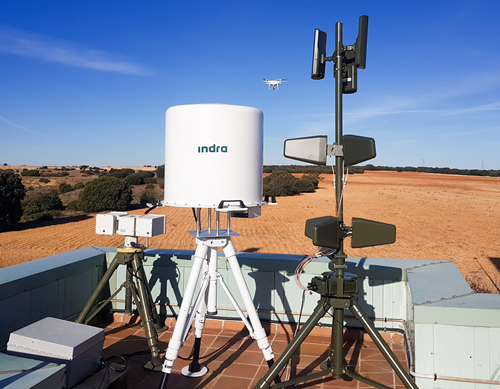 Indra has developed a counter UAS systems specifically prepared and tested to protect an airport or any other space against drones flying without authorization. The ARMS (Anti RPAS Multisensor System), which detects the presence of drones kilometers away, identifies the model and learns their weaknesses to neutralize them if they invade the space to be protected.

Indra reports it has tested its solution in countries where this type of threat is much more common and dangerous than in Europe and has already signed firm agreements with government clients, after meeting highly demanding criteria.

The solution can disable a single drone, “in a ‘surgical’ intervention, or a whole swarm of drones, applying more aggressive measures. If an invasion occurs from different points simultaneously, it activates a full protection dome….Its ability to modulate the response is key to operating in an airport without interfering with aircraft electronic equipment and it makes this system unique in the market. It can also be integrated with the tower or control center systems to exchange information and be able to detect immediately any object that if flying without authorization,” says the company.

Indra’s ARMS system comprises a radar and infrared cameras that perform detection and identification tasks. Its electronic warfare sensors sweep the radio spectrum to determine the type of link, frequency or navigation system used by the drone. “The operator supervises the entire operation from his/her control position,” says Indra. “The jamming equipment sees to cutting off communication with the pilot and blinding the navigation systems of the device. It can also use deception or spoofing techniques to take over and land it in the desired location. What’s more, it is able to determine the most likely area from which the operator may be acting to facilitate their arrest. It incorporates advanced artificial intelligence techniques that allow it to gain precision the more you use it.”