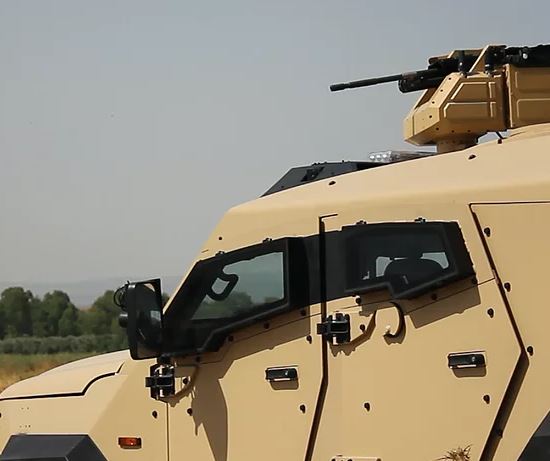 This year’s Eurosatory exhibition (11-15 June) in Paris was notable not just for the proliferation of counter-UAS systems (C-UAS) but their growing complexity and integrated designs. Apart from the Hensoldt equipment previews already mentioned in Unmanned Airspace (Hensoldt to show portable “Xpeller Gear” C-UAS at Eurosatory, Hensoldt to exhibit new C-UAS air defence radar at Eurosatory) a new generation of C-UAS equipment is emerging which is no longer stand-alone but is being offered as an integrated part of new mobile air defence suites.

Rafael launched its I-Dome at the show – a mobile all-weather air defence system designed to intercept and destroy short-range rockets, drones and artillery shells. All components are installed on a single truck and the integrated system is reported to be effective in all weather conditions and function as a stand-alone system or as part of a wider network.

Skylock launched its three-in-one anti-drone system that can neutralize a drone from 800m at Eurosatory.  The first layer is a radar which has a reported detection range of up to 20km for large objects, 10km for medium-sized drones and 5.3 km for small UASs. The second layer includes a thermal camera and tracker. The third layer is a suite of anti-drone systems including a radio frequency jamming system or, for close-in operations, a laser with a 800m range.

Rheinmetall presented its new Oerlikon Skyranger Boxer air defence system. “It can shoot down incoming rockets as well as mortar rounds – but also unmanned aerial systems, including the low, slow and small kind, e.g. quadrocopter drones; it is also highly effective against low-flying aircraft,” according to the company. “The heart of the new Oerlikon Skyranger Boxer is the air defence module, equipped with an Oerlikon Revolver Gun Mk3 turret. The system features an integrated sensor unit with X-band tracking radar and electro-optical sensors as well as electronic warfare components. This enables swift, autonomous engagement of externally assigned targets. The Skyranger can receive and process target data from both 2D and 3D search radars. Furthermore, the integrated search sensor technology and Oerlikon Skymaster battle management system give the Skyranger an autonomous sector-monitoring and target engagement capability.”

Patria launched its MUSCL (Multi-Static Coherent Location) passive sensor drone detection system. According to the company: “Passive sensor systems do not transmit signals themselves, but use radio signals transmitted or reflected by the targets. Because passive systems are extremely difficult to detect and small in size, they actually perform better than active radars in various surveillance tasks… MUSCL offers a modular and highly mobile passive air surveillance system. Its range extends to several hundreds of kilometers with a 360-degree directional coverage, and it can track more than 100 objects simultaneously. MUSCL’s operating principle allows it to detect small and low flying targets, and to pick up stealth targets even better than active radar systems. The MUSCL system is mainly designed for air surveillance by governmental authorities, but it can also be used to protect critical infrastructure, such as nuclear power plants, and major sporting events.”

Delft Dynamics showed its DroneCatcher system, which comprises a quadrotor UAS equipped with a net to capture unauthorised drones. The DroneCatcher uses a camera and laser rangefinder along with a track-and-trace system controlled from the ground for precise interceptions.

Meanwhile Elisra was at the show to promote its ReDrone C-UAS solution and Aselsan exhibited its Ihtar C-UAS.