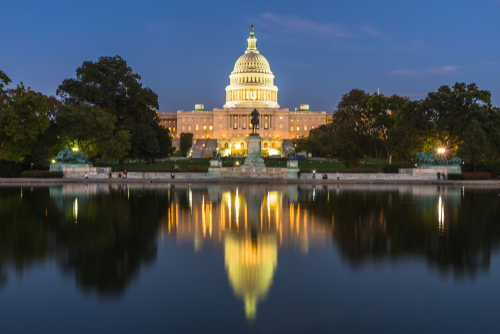 On 26 September the U.S. House of Representatives voted by 398 votes to 23 to pass the Federal Aviation Administration Reauthorization Act of 2018 (H.R. 302), which extends funding for the agency for five years and includes numerous measures which impact the US domestic drone industry. The Senate has until 30 September to pass legislation before the current measure expires.

For the drone industry there are three provisions in particular within the main provisions of the Act which have sparked vigorous debate.

Industry groups have broadly welcomed the provisions of the Act.

Brian Wynne, president and CEO of the Association for Unmanned Vehicle Systems International (AUVSI), said: “We are very pleased that the House of Representatives passed the FAA bill, which will help expand the commercialization of UAS technology and ensure that UAS are integrated into the national airspace in a manner that is safe for all aircraft – both manned and unmanned.

“The bill calls for rulemaking on a UAS Traftc Management (UTM) system, which will help ensure the safe and efficient use of the national airspace and enable expanded UAS operations, such as beyond visual line of sight. There are also provisions for rules concerning carriage of property, a necessary step for allowing UAS package deliveries. The bill additionally grants DHS and DOJ the authority to mitigate potentially malicious UAS operations, addressing security concerns, as well as provisions to implement remote identification standards.

“Additionally, we applaud the bill’s commitment to UAS safety awareness through its appropriation of USD1 million every year from 2019 to 2023 for education campaigns such as Know Before Your Fly, an initiative AUVSI cofounded with the FAA and the Academy of Model Aeronautics. By amplifying education efforts, we can continue to ensure that UAS technology is adopted safely and responsibly.

The bill incorporates several provisions of the Safe DRONE Act, bipartisan legislation introduced by Senator Mark Warner to advance the development of unmanned aircraft systems (UAS). Provisions from the Safe DRONE Act included in the FAA bill will:

“This compromise bill provides robust reforms that will allow further innovation in unmanned aircraft systems technology and advance research, providing a five-year extension of the FAA-designated test site at Virginia Tech. I’m also pleased that other major pieces of legislation I’ve introduced are part of the bill, which will promote the safe and responsible use of UAS technology while creating a pipeline of skilled workers in this transformative industry,” said Sen. Warner.

According to the senator’s office the legislation includes a directive for the FAA to develop a plan for commercial package delivery by drone within a year. “Current regulations prohibit carriage of property by drone for compensation or hire, a rule that stifles innovation and growth in this emerging industry. Authorizing the practice will unlock an important application of this technology by allowing companies to develop package delivery services…. The bill also includes language to codify the Department of Transportation’s UAS Integration Pilot Program, which was announced last fall and for which Virginia Tech was selected as a participant. Inclusion of this provision provides Congressional backing and formalizes the pilot program.”

Gary Shapiro, president and CEO, Consumer Technology Association (CTA) said: “The UAS title in this bill helps clear the way for the FAA to implement beyond-line-of-sight, flight-over-people and night-time drone operations, which our nation needs to fully realize the benefits of drone technology. The UAS title also outlines ways consumers may fly their drones responsibly without being grounded by unreasonable rules. The drone portion of this bill provides a boost of clarity and confidence to this growing sector of the tech industry, and we look forward to swift passage by the House and Senate.”

But the bill has also been opposed by groups such as the National Press Photographers Association, the American Civil Liberties Union and the Electronic Frontier Foundation worried about the broad authority to shoot down drones given to the government in the bill. The Electronic Frontier Foundation  – a non-profit organization “defending civil liberties in the digital world” said Congress should not broadly authorize federal agencies to destroy and wiretap private drones. “The new provisions do nothing to protect private drone operators—flown by journalists, businesses, and hobbyists—from unprovoked, warrantless take-downs and snooping by DOJ and DHS.”

Others have been concerned by the language used in the Act. Thaddeus Lightfoot is a partner at the international law firm Dorsey & Whitney who specializes in aviation regulation. Lightfoot was previously a trial attorney with the US Department of Justice. He has looked at the Preventing Emerging Threats portion of the bill and says:

“The language in the 2018 FAA Reauthorization Act passed by the House addresses a real problem—the potential use of UAVs to attack a “covered facility or asset,” such as a no fly area, which shows a “high risk and potential target for unmanned aircraft activity.” The difficulty is that the legislation does not define what constitutes a “credible threat,” which is the threshold for exercising the authority to bring down UAV,” Lightfoot says.

“The breadth of the proposed legislation raises two potentially significant legal issues. First, by failing to define a credible threat, Congress is ceding sweeping power to the Executive Branch. According to the legislation, the Secretary of Homeland Security or the Attorney General, in consultation with the Secretary of the Department of Transportation, have plenary authority to determine a “credible threat.” The legislation offers no criteria whatsoever for the Executive Branch to use in defining a credible threat….Second, the proposed legislation may infringe upon local police power. Although FAA has broad authority to regulate UAV operations in the National Airspace System, FAA has always carved out an exception for state and local government police power. Federal regulation typically preempts state or local laws addressing operational UAV restrictions on flight altitude or flight paths. But laws traditionally related to local policy power, such as land use, zoning, privacy, trespass, and law enforcement operations, are generally not subject to federal preemption. Many states and municipalities have enacted laws prohibiting certain UAV uses, such as for voyeurism, hunting or fishing, or carrying weapons. Authorizing the federal government to shoot down a UAV blurs the line as to where federal pre-emption ends and local police power begins,” Lightfoot says.

Further coverage of this issue will be available over the next few days. And probably weeks, months and years.