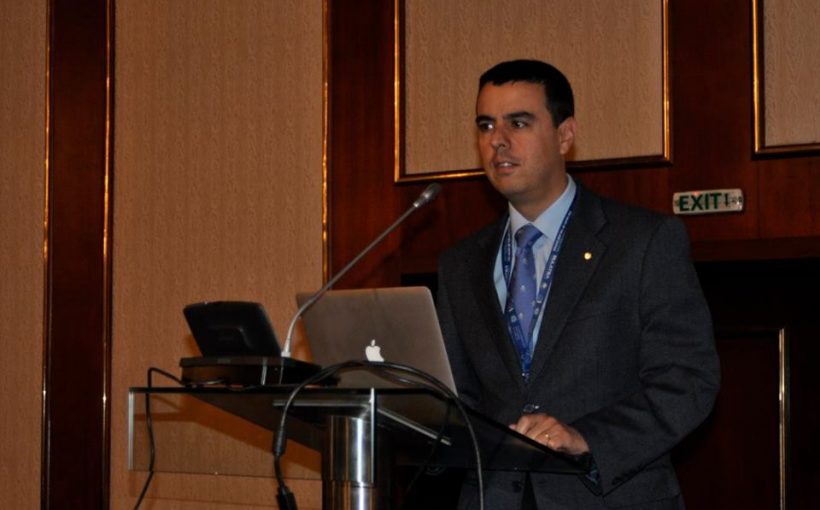 One of the most interesting events during the last GUTMA Conference was a demonstration of the UTM concept that showed how drone operations will possibly develop in a future. Starting point of the demonstration was that a drone operation supposedly developed in the vicinity of a small aerodrome. To add some additional realism the drones for the demonstration were actually flying near an uncontrolled aerodrome (Camarenilla aerodrome, ICAO code: LERN), while a simulated control position had been set up in the Conference venue. A video stream of the drone’s flight was available at the venue while its position was shown in the control display.

The process started by using a specifically designed mobile app that allowed drone operators to create a flight plan. Using the app, the drone pilot could complete the process on his own cell phone while the app provides direct feedback if there are any non-flight areas nearby. The geofencing concept was implemented by refusing automatically any flight plan crossing these areas. In the demonstration, the operator tried to create a flight plan overflying a town, which was of course rejected. In case everything is OK the system approved the flight plan automatically.

Dynamic geofencing was demonstrated by creating a new restricted area on the fly to protect the operation of a supposed medical helicopter. The drone pilot received the information immediately on his phone which was linked to the control system, making him aware of the new non-flight area.

The drones carried a system to send position information (similar to the concept of ADS-B) which can be displayed at the controller’s screen. In normal conditions the drones are filtered off but they would be shown in case they fail to comply with their rules of operation. For example: a drone that was supposed to stay below 400 ft was automatically displayed when it flew above this limit.

The demonstration continued with a simulated medical helicopter flying at 500 ft being displayed at the controller position (supposedly because it was tracked by SSR). The controller used this information to instruct the helicopter to keep away from the drone, increasing the safety of the operation.

Finally the area was supposedly under surveillance by a non-cooperative surveillance system using PSR plus detection of sound and frequency emissions to prevent airspace infringements by other drones.

The demonstration ended with the operation being performed successfully but many questions seem to remain unsolved. The following is a summary of the main issues that seem to be unsolved:

The concept of geofencing is often mentioned as a way to solve infringements but the way it was implemented  in the demonstration does not provide anything new. Any pilot must know that aircraft  shall not  be flown over the  congested  areas of  cities, towns or  settlements or over an  open-air assembly of  persons, unless at such  a height as will permit, in the event of  an emergency  arising, a landing to  be made without undue hazard to persons or property on the surface. (ICAO Annex 2, paragraph 3.1.2). Annex 2 states also that the minimum altitude over such places is 1,000 ft unless necessary for take off or landing. An app reminding pilots where the towns, restricted areas or airports close to operations are located is fine but every pilot must check such information before starting the flight no matter the type of aircraft.

Dynamic geofencing seems more promising. The possibility to define almost instantly a restricted area clear of drones in case of necessity will certainly be welcome. But who is to define such areas? The CAA? The military? The police? Any of them? These questions are still unanswered.

Providing information about restricted areas to drone operators is positive but there is still the issue of non-professional operators flying recreational drones with little training (if any) and no flight plan at all. Geofencing as demonstrated is a good step in the direction of allowing professional operations but the possibility to use technology to force drones to avoid restricted areas in order to prevent infringements is still not developed.

Drones are supposed to be separated of the rest of the traffic by keeping them at an altitude below 400 ft. Considering that the minimum altitude for VFR traffic is 500 ft it is inevitable to think about a meagre separation of 100 ft being enough to ensure safety. The way altitude is measured must also be considered: if a particular drone is using geometric altitude there may be a significant difference with the barometric altitude used by all manned aircraft.

Position information is also a source of concern. In a similar way to altitude, all aircraft providing horizontal position must comply with the same rules to ensure consistency. This means that an “ADS-B like” solution is not good enough but fully compliant ADS-B must be requested, especially if an ATCO or FISO has to provide information about a tiny device flying at less than a mile from a manned helicopter as happened during the demonstration.

But even if the drone carries a fully compliant ADS-B OUT system there is still the question of coverage. During the demonstration the drone was supposed to fly at less than 400 ft while the helicopter was supposed to be detected by SSR when flying at 500 ft. This would only happen with an extraordinary coverage. In reality, an aircraft flying at such a low altitude would only be detected in very specific areas like airports.

Finally, the demonstration was based in the provision of information to the helicopter in order to avoid the area in which a drone was operating. While successful from a safety perspective, a rescue helicopter failing to fulfill its mission due to a drone in the area is a failure even if a collision is averted. Drones are supposed to give way to manned aircraft and not the opposite. This is another reason to study how to force drones to avoid restricted areas.

The conclusion is that there are still many open questions even if the first demonstrations of UTM look promising. There is no doubt that drones will coexist with manned aircraft in a medium or even short term but the UTM concept is not mature enough to be implemented even if it is quickly moving forward.