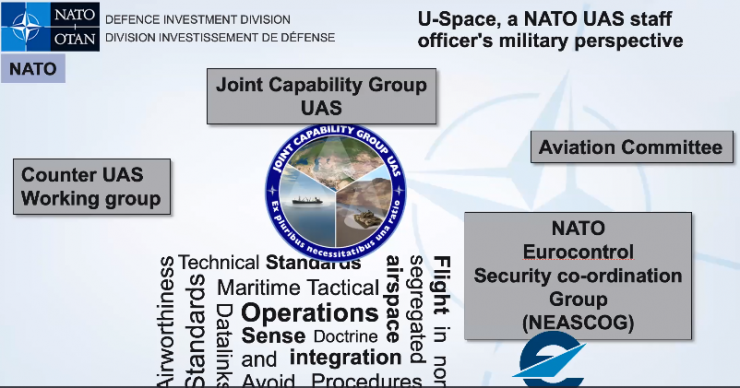 Against the backdrop of rising use of unmanned vehicles in all areas of the military, the North Atlantic Treaty Organisation (NATO) is engaged with U-space partners to ensure it can continue its defence mission within whatever constraints arise from U-space;  identify potential benefits and costs of U-space for military applications; and engage with the civil sector in the deployment of counter unmanned aerial systems (C-UAS).

McKenzie highlighted military priorities, the first of which was the IFF/verification service to enable safe unmanned and counter unmanned activity. This aspect also brings potential national air defence benefits as a result of the additional feed to the recognised air picture. He identified opportunities for the military to learn from U-space: “The recent SESAR JU report outlines potential applications and services where I can definitely see potential gains for military”. Clarification is needed to determine to what extent the military ATM community needs to engage with UTM and the interface between U-space and air defence. “We need a set of agreed standards, including service APIs and data exchange. We also need requirements between UTM, integration with ATM and C-UAS, as well as corresponding testing tools and reference implementations.”

C-UAS raises many questions: “Where is overlap of responsibility between military deployment of directed power weapons to remove UAS from the sky? This is easy to understand in the deployed context, but where does that fit in the national context, such as airports, and where is the overlap with civil? In the case of a military aerodrome, is the airspace above it the responsibility of the civil or military?”

NATO policy is determined by the Joint Capability Group UAS which addresses issues including airworthiness, standards and UAS integration, and recently released the NATO Policy document for Unmanned Aircraft Systems which “promotes a coherent and consistent approach to UAS across the Alliance,” explained McKenzie. In addition, the NATO/Eurocontrol ATM Security Coordinating Group (NEASCOG) is working closely with the European Defence Agency (EDA) to understand safety, security & financial implications of U-space. A stakeholder consultation group in January 2021 will be followed by publication of the EDA U-space impact study.

NATO is focused on ensuring safe operations in low-level airspace where fast jets and rotorcraft potentially operate alongside domestic users. “The F35 will be the last manned fighter. By 2030, UAS may constitute 50% of military aircraft in some nations,” says McKenzie.