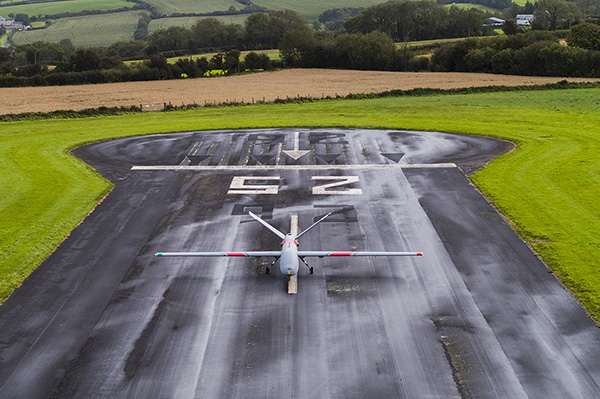 During a recent series of trial flights, UK air navigation service provider NATS has been working closely with the Maritime Coastguard Agency (MCA) to assess how remotely piloted and unmanned aircraft can be used for search and rescue operations by HM Coastguard. A report by NATS Head of UTM Service Integration, Mark Watson, describes how the concept could revolutionise emergency response at sea.

The trial flights involved several test ‘missions’ for a remotely piloted Elbit Hermes 900 aircraft, including a single 10-hour sortie where the aircraft took off from West Wales Airport (Aberporth), transited controlled airspace and performed a low-level overwatch mission in Oceanic Airspace off the south-west coast of Ireland.

An unmanned aircraft passing through controlled airspace alongside commercial manned traffic is a complex operation and close involvement was required from the team at our Swanwick air traffic control centre to plan, communicate and conduct the operation safely.

On its outbound leg, the aircraft (callsign ‘Coastguard 26’) spent around two hours in communication with Swanwick, covering 50 nautical miles through UK controlled airspace to the boundary with Irish airspace, where it was successfully transferred to Shannon Control.

Unlike many unmanned flight trials which operate in their own segregated areas, the Hermes 900 was handled by Air Traffic Controllers in the same way as other manned aircraft.  The team at Swanwick leveraged the expertise they developed in previous projects to enable the Unmanned Aircraft System (UAS) to fly safely in controlled airspace, despite the pilot being many miles away on the ground at West Wales Airport.

The most obvious difference was the speed of the aircraft itself, compared to jet powered, manned aircraft. This presented a challenge in terms of safely integrating with aircraft flying at normal cruising speeds – rather like riding a pushbike along a motorway!  Thanks to the expertise of the team at Swanwick this issue was identified beforehand, and it was alleviated by ensuring the drone flew at the lowest available Westbound flight level (16,000ft) to allow faster jet traffic to overtake by passing safely above it.

From a NATS and ATM perspective, the flight was a complete success, with the aircraft flying its planned route within controlled airspace, remaining in communication with the team at Swanwick and safely separating from other air traffic at all times.

Unmanned Aerial Vehicles (UAVs) in all their forms are an inevitable part of our future and the demand for these aircraft is helping to drive the development of tools to assist in their safe control. This trial clearly demonstrated that integrating a UAV with manned aircraft is more than possible and should prove to be a significant milestone for the next generation of maritime operations – from search and rescue to counter-pollution patrols.