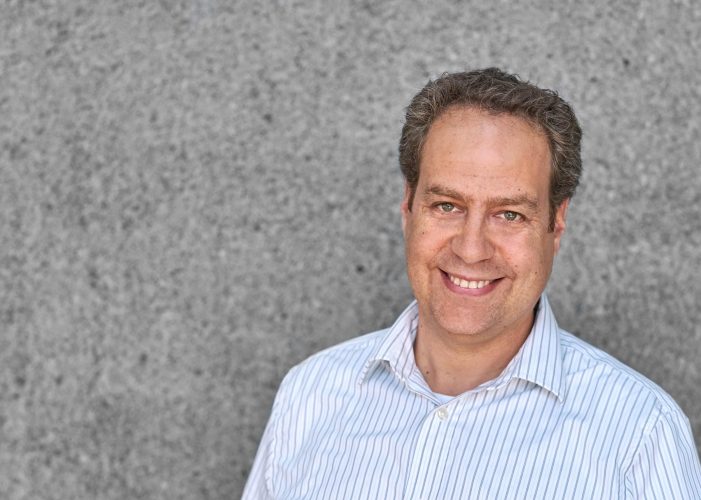 Ori Marom is Head of Autonomous Transport, Digital Business Solutions, at the Port of Rotterdam, the Netherlands

Do you have a strategic vision of drone operations within the Port of Rotterdam?

We do. We have a strategy around drones in particular and new modalities in general. We regard drones and unmanned air mobility as the fifth area of transport modality at the port – we have ocean-going vessels, rail, road, and inland shipping and we want to develop drones as the next transport mode. It’s a very important topic for us.

The Netherlands has an advanced drone industry, with government departments embracing the concept as pioneering operators and regulators. How will drones operate in the port of Rotterdam in five years’ time?

This is a new area for us, for any port, so we don’t know in detail. But we want drone operations to be an integral part of the port but that’s a difficult task to achieve. The first step we are working towards is gaining a degree of control over our own airspace, so we are part of the decision-making process that decides how drones are managed and approved to fly over the port. The question we still need to answer is: who controls the airspace above the port? We would like to have a large measure of control over a well-defined airspace.

How do you achieve that?

We would like to have a role in the general discussions which are taking place now. These include government discussions about how we manage drones over the national territory and across borders. But we also need clarity to understand the regulatory system to cover a complex environment such as a port, which requires a closer and maybe specialised type of supervision given the large numbers of drones we will have to manage, which could be very different from a city or a rural eco-system. At the very least, we need to make clear that we are a complex industrial community housing over 3,000 companies so our natural role is to be a single voice for all of them and to discuss with our clients what their intentions are.

Have you defined how much airspace you will need and what sort of role the port should play in developing its own drone management ecosystem?

We have an idea of what kind of airspace we would require because we know how tall our installations are. So we would need a substantial amount of airspace but we do not want to ask for more than we need because we are operating close to Rotterdam airport and the City of Rotterdam –  which are very different environments to the port.

We see an important role in traffic management – not very different to what we do with other vehicles on road or waterways. We would like to know who enters the port and make sure that they are certified organisations and are conscious of other port users. We see our role as an air traffic management coordinator but it’s too early to say in exactly what capacity this will be. So for us it’s an open question but we definitely see our role as an agency with the authority to grant, or deny, permissions to enter the port. We have hazardous materials here and sensitive areas, such as refineries with dangerous and explosive goods. So we very much want to know who is flying over the port, what capabilities they have and how responsible they might be.

It has always been clear to us that we need a system in place to ensure we can identify both legitimate and rogue drones, at least, drones not authorised to fly in certain areas.

We would also like to have a supervisory role to coordinate and facilitate the ecosystem infrastructure on behalf of our clients. For example, we would like to make sure that if an operator wants to fly a drone over more than one private terrain then there is an orderly way to transverse the border between different private properties and private and public areas.

Are there any drones flying regularly over Rotterdam Port at the moment?

We already have drones operating at the port. For example, Dutch Drone Company provides drone-based inspection services to clients in the chemical sector. Our container terminals also using inspection-drones.  However, these operations typically involve a small number or drones flown exclusively over private terrain. Multiple drone operations in the public airspace is something we have to be ready for – it’s not an immediate problem.

Who are you talking to in the government about this?

Mainly environment and transport officials, part of the Ministry of Infrastructure and Water Management and through them we are participating in other forums. We are at an early stage in the discussions and we have to make sure that our role can be defined.

Do you have a timescale for when we might see multiple drone operations in Rotterdam port?

Heavier drones and multiple operations will depend on EU legislation.

In terms of unmanned traffic management systems, we are far from ready to operate multiple operations because the public airspace is not defined yet. This will take some to achieve but I expect it will be here in the next ten years.

That’s still some way away – not next year or the year after?

I hope it will happen sooner but I don’t see an easy solution to the problem of managing unmanned operations in large numbers. We are a very large port, managing about 470 million tonnes of freight per year, so we’re talking about the operation of thousands of drones and that will depend on traffic management systems and legislation that doesn’t exist.

I would very much like to see them here in five years but I don’t see that happening.

Does the port have partners to develop its drone management strategy?

We have several partnerships. In January we announced we had joined the Dutch Drone Delta Coalition with KLM, KPN, Schiphol airport, as well as other parties, to discuss some of these issues and trial technology that is relevant to the consortium. We also have a partnership with a passenger drone operator – more details on this soon.

How do you balance the contradictory roles of protecting airspace while promoting drone operations?

We are always on the lookout for new technologies that might be relevant for our users and the wider port community. For example, we are researching how autonomous trucks might be used in the port and are planning a large-scale deployment of the technology at the end of 2021. First we have to identify technologies which may be relevant to our users and communicate with most   if not all of them – about the relevant technology. That’s a coordinating role that we play regularly with vehicles and other new concepts such as collaborative information technology.

Once there is a general agreement that a new technology is relevant to the port we facilitate its introduction after ensuring its safety. We have a unique capacity to adopt technologies that are not yet widely accepted in the market – such as autonomous vehicles.

So we have three roles: technology scouting, provision of a safe environment, and a catalyst to adoption. 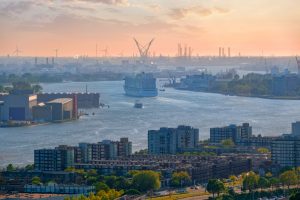 Are you talking to other ports about drones?

We are in close contact with Antwerp and Hamburg about drones and other new concepts. Our approach is to regard them as collaborators – at least when it comes to technology – rather than competitors.

What’s the view of your Rotterdam port colleagues about drones?

There’s an unexpected degree of enthusiasm about them and that makes me very optimistic that adoption will be quite rapid and widespread in the port.  We see wide possibilities for useful implementations in areas such as rapid transport of medical supplies, fire-fighting, and monitoring of ship’s compliance with emission regulations.

In short, it’s an exciting, useful and cost-saving technology and we don’t see any reason why the Port of Rotterdam should not become one of the earliest adopters of drones in the global logistics community.

The traffic management problem is crucial and then we need to tackle the challenge of safety. There’s the issue of flying drones over multiple private areas and how we should decide, as a community, on the best ways to adopt them. There are very prominent and important concerns about flying over dangerous goods. And since we are close to the city and places of dense population the noise issue is also a concern because we manage large-scale operations.

So what are the next steps?

The best way to predict the future is to create it, and if our clients like our ideas then we believe the first steps which might be small-scale operations in the next year or two.  We don’t see thousands of drones operating in the port soon but we do see opportunities for small-scale deployment of specialized drones carrying packages such as spare parts, medicines and indeed even passengers to ships at sea or at anchorage. We believe drones with moderate cargo capacity, such as in the range of 200-400 kilos, will be a reality very soon. We would like to take a leading role in incorporating those in a case-by-case basis in the next year or two.

The price of drones has dropped significantly recently and artificial intelligence (AI) is developing rapidly. It’s a very exciting time. We regard drones as one more type of autonomous vehicle and we see a great number of exciting developments with regard to other autonomous programmes such as trucks and ships. We see the port becoming much better connected and much more autonomous.

Do you think governments and regulators understand your particular issues when it comes to developing port-based drone ecosystems?

We are the largest port in Europe and responsible for EUR45.6 billion of added value each year – or 6.2% of the entire gross domestic product of the Netherlands. That gives us a unique role in our discussions with the government. Not every port can assume this role so we also have a responsibility, as an innovation hub, to represent the interests of other ports. So we have a unique role because of our sheer size, our reputation and the technologies we develop in-house. The port of Rotterdam is a unique place.