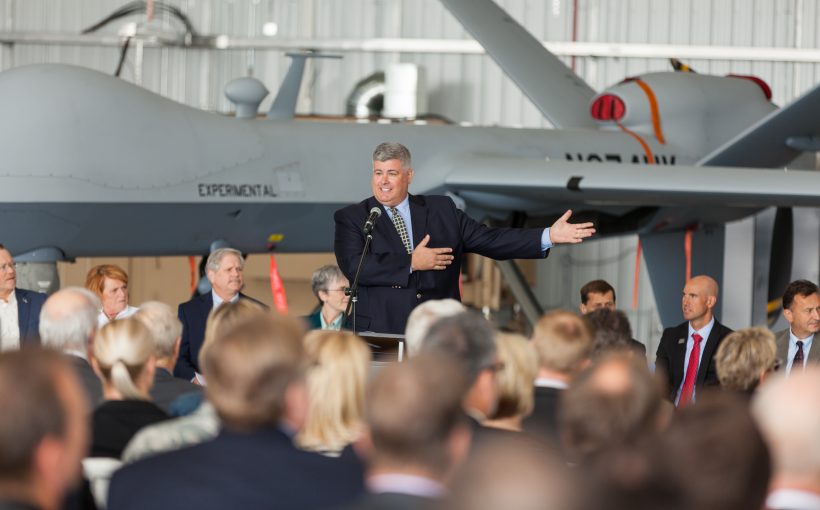 In early August this year the Grand Sky commercial UAS research and development park, co-located with the Grand Forks (North Dakota) US Air Force Base, became the first US location to receive regulatory approval from the Federal Aviation Administration (FAA) to host commercial beyond visual line of sight (BVLOS) test flights. On 20 August, General Atomics Aeronautical Systems Inc.’s Predator A became the first unmanned aircraft to fly a BVLOS mission from the company’s training and research centre at Grand Sky. Thomas Swoyer, Jr. is President of the Grand Sky Development Company.

What are you planning to achieve at Grand Sky?

We are focused on the end users, the Unmanned Aerial Systems (UAS) companies serving markets such as agriculture and energy. We want to help them develop cost efficient services, getting them into the air and enabling their businesses to be more profitable.

Grand Sky is a private entity, but it’s built through a public-private partnership with Grand Forks County and the US Air Force. We lease property from the Air Force and they have given us permission to use the runway and they provide tower, ground and emergency support services. So we have all the capabilities of an active Air Force base, including a 12,351ft runway and – as we look at larger and larger UAS – the length and width of that runway will become very important.

The crux of our strategy is leveraging existing infrastructure. We know that somewhere along the road there will be new technologies introduced that will make things safer and better, such as airborne detect and avoid systems. But we also know that the current air traffic control system is predicated almost completely on ground-based radars, so we are leveraging the radar we have access to at Grand Sky, the digital surveillance radar owned by the Air Force, to prove that new types of UAS can work within the existing technology. Our vision is to start with existing systems and then slowly add the new technologies to see how they add value.

We now have the airspace awareness to detect non-cooperative aircraft. Alongside the Air Force primary radar, we have a Harris Corporation ADS-B system and we will integrate further sensors into a common operating platform that will give us the opportunity to see large and small manned and unmanned aircraft.

How difficult was it to achieve FAA approval for BVLOS flights here?

The first application was put in three years ago and we finally received it a month and a half ago. So it took a lot of work in defining what systems would be here, how the systems work, and how they will all work together to demonstrate our ability to see the airspace. We had to do a lot of airspace characterization. We had to conduct a lot of dry run tests with the FAA so they could see it, to understand how we would conduct the flights and then expand the operations.

Our partnership with the Northern Plains UAS Test Site (NP UAS TS) was critical to the process. We have all the physical infrastructure but it was Nicholas Flom, executive director of the NP UAS TS, and his team who worked with the FAA to get the BVLOS process certified.  They are critically important partners to Grand Sky.

How are you supporting BVLOS operations now at Grand Sky?

We currently have two tenants here – Northrop Grumman and General Atomics Aeronautical Systems Inc., which is currently flying an MQ1 Predator and MQ9 Reapers for training and testing. We have been actively involved in helping to remove chase planes from their operations. As we add more capabilities and more amenities we are finding more companies are displaying an interest in this site. So with this BVLOS capability there has been a wave of companies wishing to conduct flight tests on sensor equipment and companies interested in testing their BVLOS management systems.

How do you see your BVLOS operations developing?

At the moment we have an airspace 30 nautical miles (nm) around Grand Sky cleared for BVLOS operations. Our goal is to go out to 60 nm and then perhaps the entire airspace of North Dakota within one year. We want to fly UAS up to 18,000ft so they can transit through Class A airspace and truly utilize the full range of their capabilities.  For example, it’s a lot easier to conduct pipeline inspections for 2,000 miles of pipeline in a single mission with a large UAS and no chase plane.

I understand why the FAA controllers would not want to be doing separation work on UAS 400ft and below but we are starting to fly larger aircraft above 10,000ft so they can start the process of integrating these operations with commercial aircraft. Larger aircraft fit into the ATC system so much better than smaller aircraft. That’s the Holy Grail, to fly above 10,000 ft so we can conduct longer range operations with UAS that have more flight capability.

We now have permission for night flights, day flights and BVLOS and new operations can very inexpensively and very quickly get up the air.

At Grand Sky the emphasis is not so much about testing BVLOS flights but getting out of the test phase and into BVLOS operations. There are a lot of pipelines and agricultural land that could be surveyed, for example, and we believe large UAS are going to be the solution to cost-effectively undertaking these kinds of surveys.

So are you involved in any FAA BVLOS research work?

All the investment in Grand Sky is dedicated to giving companies the opportunity to fly operations themselves, to give them the environment in which they can safely test or fly their systems. We can provide the base state, the safe airspace environment – the FAA has already accepted that by virtue of the BVLOS approval they granted – but it’s up to the client to define the tests and projects they want to undertake and we will build the framework for them to conduct the operations safely.

Our airfield operations centre is always in radio contact with the Air Force Base tower, the pilots and the ground control system. UAS operators follow normal ATC and airspace procedures like any other aircraft operator or pilot; we don’t have to tie in proprietary networks. If you have an emergency just declare an emergency – pilots, controllers and ground personnel all know how to handle emergencies here.

What’s been the attitude of local communities to the work you are doing here?

Local communities are extremely supportive of what’s been going on at Grand Sky partly because we create jobs and partly because this is a new industry. The concerns around privacy are never going to go away. We talk with people constantly. We help explain how UAS are being used.

But we operate from an Air Force base and people are accustomed to having UAS flying here so it’s not something necessarily new. Large UAS have been operating out of Grand Forks Air Force Base since 2009 so we are just adding to that traffic.