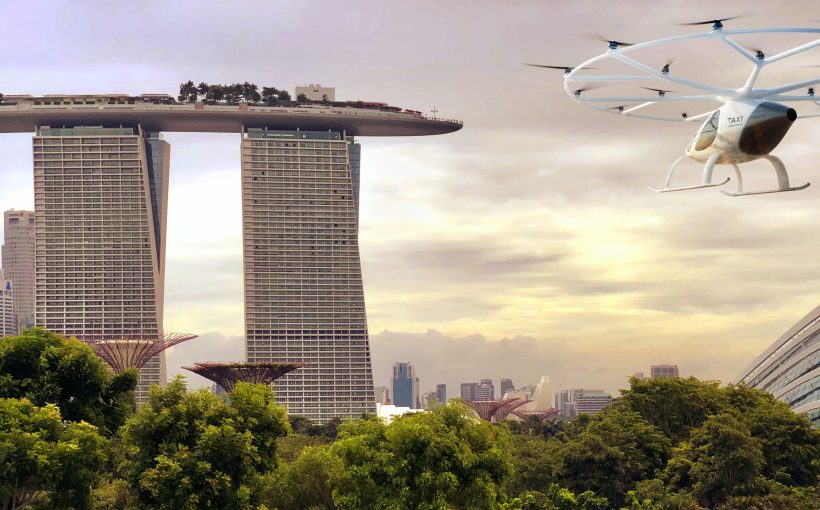 Air taxi manufacturer Volocopter has announced it will perform a series of flight tests in Singapore in the second half of 2019.

“The series of tests…are supported by the Ministry of Transport (MOT), Civil Aviation Authority of Singapore (CAAS), and Economic Development Board (EDB),” said the company in a press statement. “These flight tests are designed to validate and verify the ability of Volocopter’s eVTOL vehicles to operate in Singapore’s urban environment and will culminate in public demo flights. Volocopter and CAAS will work together to establish the scope of the flight trials and ensure that the necessary requirements are met before flight tests are allowed to commence. In addition to the flight tests, Volocopter will be setting up a product design and engineering team in Singapore to support its expansion plans. They are also looking for real-estate developers, mobility providers and businesses ready to join their quest to enable air taxis in Singapore.

“There is potential for air taxis, or eVTOLs, to transform mobility and logistics in urban cities. Volocopter is at the forefront of such new and innovative technology in the aviation industry. CAAS is pleased to work together with Volocopter to study the technical capabilities and develop appropriate operational guidelines to facilitate such trials in Singapore,” said Mr. Ho Yuen Sang, Director (Aviation Industry), CAAS.

Mr. Tan Kong Hwee, Executive Director EDB Singapore said, “Volocopter’s decision to set up a local product design and engineering team in Singapore is a testament to Singapore’s aerospace engineering talent, as well as our prime position for industry players. We are excited to welcome Volocopter to Singapore and look forward to our future partnerships.”

“We are getting ready to start implementing the first fixed routes in cities,” says Florian Reuter CEO of Volocopter. “Singapore is a logical partner: The city is a true pioneer in technology and city development. We are confident this is another exciting step to make air taxi services a reality.” Volocopter holds a preliminary permit to fly from the German authorities since 2016 and is cooperating with the European Aviation Safety Authority (EASA) to receive a full commercial license. They fly regularly in Germany and have performed numerous public flights.

In September 2017 Volocopter performed a public unmanned test flight in Dubai, where they partnered with the Roads and Transport Authority of Dubai in their endeavor to implement air taxis into the public transportation mix.