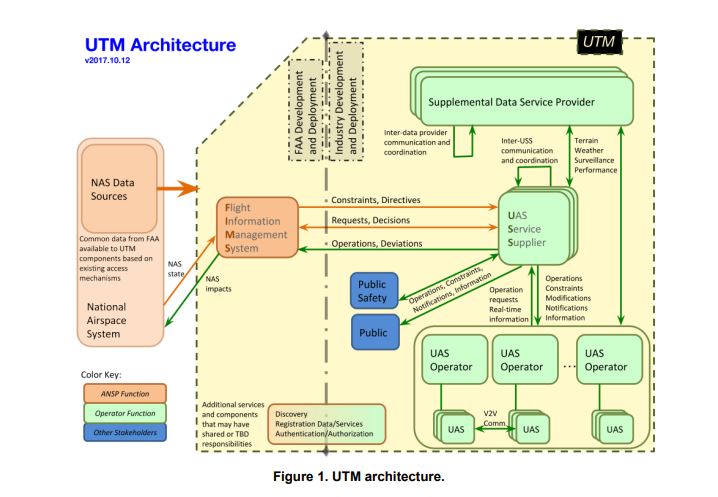 NASA has published a new report as part of its UAS Traffic Management (UTM) Project, outlining its latest thinking on a UTM architecture for commercial UAS Service Suppliers (USS) to collaboratively provide services in an urban environment.

“The UTM Project planned a phased approach based on four Technical Capability Levels (TCLs),” says the executive summary of the report. “As of this writing, TCL4 is currently in development for a late Spring 2019 flight demonstration. This TCL is focused on operations in an urban environment and includes the handling of high density environments, large-scale off-nominal conditions, vehicle-to-vehicle communications, detect-and-avoid technologies, communication requirements, public safety operations, airspace restrictions, and other related goals.

“A key component of this architecture is the UAS Service Supplier (USS), which acts as a communications bridge between UAS operators and the ANSP when necessary. In addition, the collection of USSs form a USS Network to collaboratively manage the airspace through the sharing of data and the adherence to a standard or set of standards required to participate in this USS Network. This document provides a record of the second of four planned steps in the development of interoperable USSs that will ultimately support TCL4 flight testing and formalization of the overall UTM concept.

“To develop these USSs and their underlying specifications, NASA has planned a series of “Sprints” to work with industry partners in implementing the features and develop proposed specifications for USSs in order to to participate in TCL4. This report describes Sprint Two. In this Sprint, there was a major theme with four goals. The theme was the development and testing of a new USS discovery system, to better enable USSs to find and communicate with each other. The goals supporting this theme were: participants needed to implement and exercise the discovery service for USS-USS communications; USSs needed to demonstrate strategic de-confliction through operation sharing; the systems were to use discovery to aid in handling off-nominal operations; and finally, there was an investigation of an initial off-nominal reporting capability.

NASA has been working with Project Wing to determine the best way for USSs to share data within the UTM framework. According to this latest report:

“NASA requested specific changes to InterUSS to better align and support NASA’s concepts and requirements within UTM for TCL4. Project Wing has implemented those changes (and continues to do so) within a non-trademarked TCL4 branch of their codebase. The modified, non-trademarked version is called Gridded USS Discovery (GUD). Three key modifications for GUD are as follows: