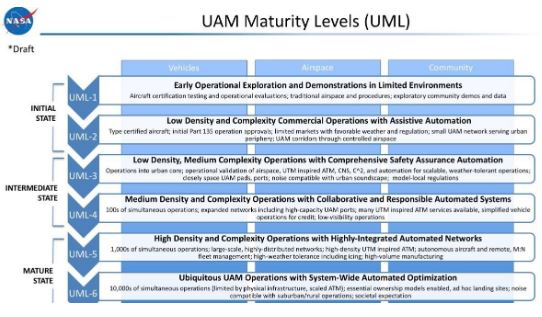 On 1-2 November 2018 NASA’s urban air mobility (UAM) vision and research roadmap were given a public airing at the NASA Urban Air Mobility Grand Challenge Industry days (https://www.unmannedairspace.info/uas-traffic-management-tenders/nasa-issues-first-urban-air-mobility-grand-challenge-industry-request/). NASA unveiled its concepts for UAM maturity levels – from the initial state of early operation exploration and demonstrations in limited environments (where we are now) to a final state of ubiquitous UAM operation with System Wide Automated Optimization.

NASA plans to advance progress on UAM with a series of grand challenges, with the next one (GC1) planned for January 2020 when industry partners will be asked to address the foundational airworthiness UAM vehicle design readiness and robustness for UAM operations, followed in January 2021 by GC2, which will address key safety and integration barriers.

“The goal of this first in a series of UAM Grand Challenges, which we are calling GC-1, is to promote public confidence in UAM safety and facilitate community-wide learning while capturing the public’s imagination,” said NASA in a statement.

At the same time NASA published its latest research findings into comparing the strengths and weaknesses of competing UAM vehicle designs. (https://ntrs.nasa.gov/archive/nasa/casi.ntrs.nasa.gov/20180006683.pdf). “The question of which aircraft type is optimally suited to performing economically viable Urban Air Mobility missions has been and will continue to be the subject of much debate. Rather than propose to identify the singular best type of vehicle (which may be determined as “best” for a non-technical and perhaps even non-economic reason), this study is considering a broad variety of types of vehicles which appear to be viable given our current understanding of UAM markets,” said the study.

Based on three different aircraft types (quadrotor, side-by-side helicopter, and lift-plus-cruise) NASA has reached a number of conclusions, including –