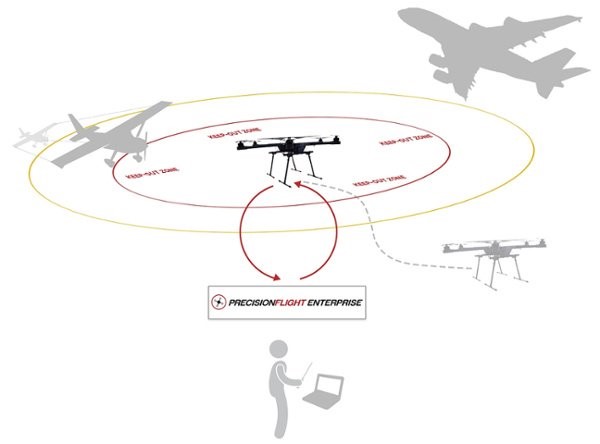 PrecisionHawk has announced it has developed the first Beyond Visual Line of Sight (BVLOS)-enabled drone platform. “It includes the latest in aircraft detection technology, delivering to the drone operator the situational awareness necessary to deconflict airspace and avoid a potential confrontation,” said the company. “Key to this capability is cutting-edge acoustic detection technology, which can identify aircraft within a 10 km radius….The BVLOS-enabled drone platform was designed based on recommendations in the Federal Aviation Administration (FAA) Pathfinder Report. Delivered earlier this year, the report outlines a comprehensive safety case and standards to operate drones BVLOS.”

“The completion of the Pathfinder Program marks the end of three years-worth of research that outlines specific recommendations for training and technology to maximize safety and accomplish the next phase of industry expansion,” said Michael Chasen, PrecisionHawk CEO.

The full report, which describes how to develop a safety case and choose technology that is required to fly BVLOS can be found here: FAAPathfinderReport.com

The FAA requires high safety standards from drone operators seeking to fly beyond line of sight. To-date, more than 1,200 BVLOS waiver applications have been submitted by commercial drone operators, of which 99 percent have failed to demonstrate an acceptable level of safety, according to the company.

“Through the Pathfinder fieldwork, PrecisionHawk identified three pieces of technology that should be required for safe BVLOS operations. The technology components were incorporated into a multirotor drone that can fly two hours and up to 40 miles in one flight to support safe, long-range operations: