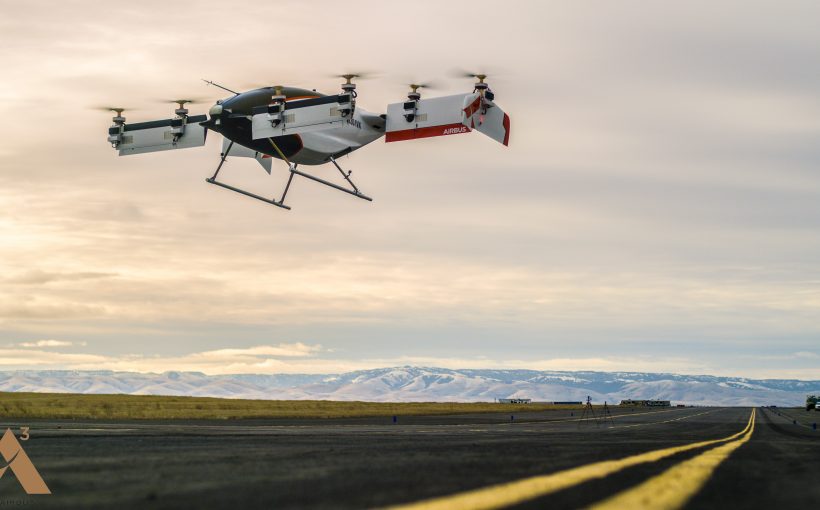 On 1 February A³ by Airbus announced that its Vahana all-electric, self-piloted, vertical take-off and landing (VTOL) aircraft completed its first full-scale flight test, reaching a height of 5 meters (16 feet) before descending safely. The test was completed at 8:52AM Pacific on January 31, 2018 at the Pendleton UAS Range in Pendleton, Oregon. Its first flight, with a duration of 53 seconds, was fully self-piloted and the vehicle completed a second flight the following day.

“Today we are celebrating a great accomplishment in aerospace innovation,” said Zach Lovering, Project Executive of Vahana. “In just under two years, Vahana took a concept sketch on a napkin and built a full-scale, self-piloted aircraft that has successfully completed its first flight. Our team is grateful for the support we’ve received from A³ and the extended Airbus family, as well as our partners including MTSI and the Pendleton UAS Range.

According to A³ by Airbus  “Project Vahana intends to open up urban airways by developing the first certified electric, self-piloted VTOL passenger aircraft. We envision Vahana being used by everyday commuters as a cost-comparable replacement for short-range urban transportation like cars or trains. No more traffic accidents or train delays to impact your plans. We anticipate speeds will be 2-4x faster than cars or traffic, and have a flight range of about 50 miles (80 km). A core premise of this project is that full automation and sense-and-avoid technology will allow us to achieve higher safety levels by minimizing human error while allowing more vehicles to share the sky. Vahana can be an air taxi, but it can also be used as a cargo delivery platform, ambulance, search and rescue, mobile hospital, limousine, or even as a tool to deploy modular infrastructure in disaster sites. It can be as diverse as its wheeled grounded counterpart.”