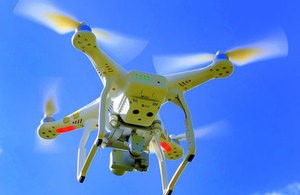 The UK government is to set up a drone registration system, give police new powers to prevent the unsafe or criminal use of drones and launch its own version of the USA’s drone integration programme.

According to the UK’s Civil Aviation Authority (CAA):

“The measures are intended to allow drone users to continue flying safely and legally, helping to place the UK at the forefront of the fast-growing drone industry. This will also pave the way for the devices to be harnessed for a range of uses by businesses and public services. The draft Drone Bill, which will be published next spring, will give officers the right to order operators to ground drones where necessary. Officers will also be able to seize drone parts to prove it has been used to commit an offence.”

New measures will also make it mandatory for drone owners to register to improve accountability. And drone operators will be required to use apps – so they can access the information needed to make sure any planned flight can be made safely and legally. Banning drones from flying near airports or above 400 feet could also form part of the new regulations.

The government will publish the draft Drone Bill for consultation and introduce secondary legislation amendments in spring 2018. Changes to the Air Navigation Order will mean that that mean:

The government is also working closely with drone manufacturers to use geo-fencing to prevent drones from entering restricted zones.

The Flying High Challenge, funded by the government and run by Nesta in partnership with Innovate UK, is set to launch 27 November when cities will be invited to register their interest.

Up to five cities will be supported in the research and development of drone technology which could transform critical services in – for example, emergency health services and organ transport, essential infrastructure assessment and repair, and parcel delivery and logistics.