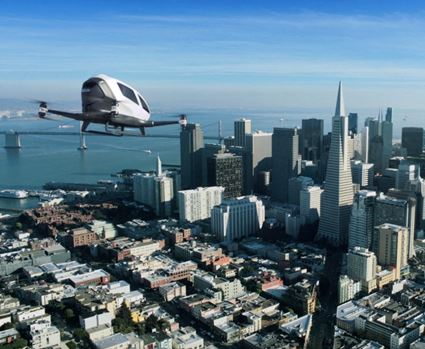 The UK’s Daily Star newspaper reports that China’s EHang is developing a two-seat autonomous 100kmh drone taxi for mass production in 2018 – and is looking for customers in Dubai, Singapore and Europe to become launch customers for the vehicle.

The digital sky initiative consists of three steps. Step one (2017 and 2018) seeks to set up connected drone application demo sites and promotes standardization of cellular-network-based management. Step two (2019 and 2020) requires field tests and aims to achieve small-scale commercial use (deployment in over five countries). Step three (2020 onwards) is designed to bring low airspace digital networks into commercial use, and provide network coverage for at least 30% of low airspace. Huawei Wireless X Labs has also set up a Digital Sky Special Interest Group, gathering governments, operators, drone vendors, industry organizations, and other customers. In October 2017, the world’s first Digital Sky Hub was founded in Shanghai. It aims to encourage joint efforts to set up drone application demo sites. In 2018, hubs will be set up in Europe, Canada, Korea, and other locations around the world.

EHang founder and CEO, said: “EHang is glad to cooperate with Huawei Wireless X Labs, by joining the strength of Huawei in the field of global communication network, and the unique capabilities of EHang connected drones in zero-threshold smart App control, intelligent flight command and control platform, and interaction data distribution and processing, to build up a low airspace digital sky city. Meanwhile, EHang will work with more upstream and downstream industry partners, such as telecommunications network operators and drone application providers, to build a mobile Internet ecosystem in the air.”

In May 2016 EHang announced a new collaboration with Lung Biotechnology PBC to develop and purchase up to 1,000 units of an evolved version of the 184 to automate organ transplant delivery. The two companies have agreed to work together over the course of the next fifteen years to optimize the 184 for organ deliveries, a program which they are calling the Manufactured Organ Transport Helicopter (MOTH) system.