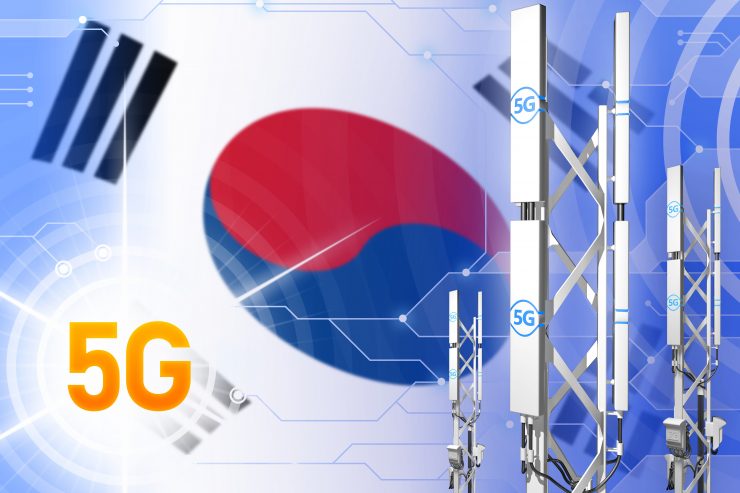 In April 5 Korea became the first country in the world to roll-out a 5G mobile telephone network. Earlier this year KT (formerly known as Korea Telecom) awarded Ericsson a 5G commercial contract to enable the nationwide launch of commercial 5G services in the country.

Under this initial commercial contract Ericsson is providing 3GPP (Third Generation Partnership Project) standards-based 5G New Radio (NR) hardware and software from Ericsson’s complete 5G platform to cover KT’s 3.5 GHz Non-Standalone (NSA) network. The two companies are targeting drone management services as an early market opportunity for this new technology. 5G will massively extend the amount of data which can be communicated along with the range and robustness of the communications link.

According to Ericsson: “In line with its cellular Internet of Things (IoT) vision, Ericsson is launching enhanced functionalities for Massive IoT and new solutions for Broadband IoT. One example of Massive IoT enhancement is the NB-IoT Extended Cell Range 100km, which stretches the standards-based limit from around 40km to 100km through software updates without changes to existing NB-IoT devices. This opens huge opportunities in IoT connectivity in rural and remote areas, particularly for logistics, agriculture and environment monitoring. Ericsson has deployed NB-IoT data connections up to 100km with Telstra and DISH.”

The advent of 5G will, believe many UTM experts, transform the drone management and flight control markets. The first 5G New Radio (NR) specifications were made available in June 2018; later releases of NR will be able to exploit frequencies beyond 52.6 GHz and by introducing artificial intelligence in the radio-access network.

Earlier this year at CES 2019 Verizon Chief Executive Officer Hans Vestberg spoke of the quantum leap which 5G will bring to autonomous vehicles, advanced robotics, artificial intelligence and more – with major implications to the UAS sector. These include: mobile devices travelling at up to 500 kilometers per hour can potentially stay connected on a 5G network, and up to one million devices can be supported by 5G in a square kilometre; 5G network equipment and devices will consume only 10% of the energy consumed by 4G network equipment and devices, and specialized services that will operate on the 5G network will take much less time to implement; five millisecond end-to-end travel time of data from the mobile device to the edge of the 5G network – “faster than the blink of an eye, and 5G will be more than 99.999% reliable.” Mariah Scott, CEO of Skyward, Verizon’s UTM company, said Verizon would be the first company to connect 1 million drones to the 5G network.

Even before mobile telephone consumers have bought their first 5G handsets Rakuten Mobile Network announced the successful completion of a large-scale trial of technologies in Japan that demonstrate the capacity for 5G infrastructure to manage drone operations (see table below) while Latvia’s LMT Innovations – a branch of a mobile telephone operator in Latvia – reported it was working on developing a new UTM system based on 5G communications to allow for beyond visual line of sight (BVLOS) operations.

The 5G aviation revolution is already underway in Asia – and it is not confined to drone management.

According to China’s government press agency Xinhuanet release of 19 February 2019 (http://www.xinhuanet.com/english/2019-02/19/c_137834300.htm) “The Shenyang general aviation industry base in Liaoning Province launched a 5G base station Tuesday, making it the first 5G-covered general aviation airport in northeast China. The base station was built by China Unicom’s Shenyang branch. A single 5G base station is able to handle a downlink of at least 20Gbps and an uplink of 10Gbps, around 10 times the speed of the current 4G network, according to tests. The 5G network in the industry base will be mainly used by aviation firms to conduct flight tests and research and development, and support the development of the unmanned system in the industry base.”

Even more significantly the Civil Aviation Administration of China produced a paper at the 13th  ICAO air navigation conference in Montreal in November 2018 outlining the results of an experimental verification project for ATG-LTE technology to support ground-air ATC communications (https://www.icao.int/Meetings/anconf13/Documents/WP/wp_244_en.pdf). The conclusions of the study were that: “CAAC has approved the technical verification of 10 routes in China, Beijing -Guangzhou/Shenzhen, Beijing -Shanghai, Beijing -Chengdu -Chongqing -Kunming. At present, China Mobile has completed the reconstruction of ATG ground base stations in three routes: Beijing to Chengdu, Beijing to Guangzhou, and Beijing to Shanghai, and has modified around ten test flights of Boeing 737NG series, Airbus A320 series, Cessna 525, Cessna 680, – etc. Air China airline has completed the modification of two aircraft, in addition, more than 400 flight trails were performed. The results of the flight test proved that: The experimental system ground-air broadband communication with ATG-LTE and satellite communication is stable and reliable.”

There is plenty of research (https://arxiv.org/ftp/arxiv/papers/1803/1803.11048.pdf) to show how mobile networks, especially 5G mobile networks, can add valuable services to the UTM system such as independent drone identification, authorization, and backbone communications for information distribution.

The introduction of UTM services has been largely overseen by national ANSPs – UTM service providers have been rapidly developing the core technologies to seamlessly link low level airspace management with mainstream ATM systems, under management of ANSPs. Within this relationship telecom providers have been seen as valuable infrastructure providers. 5G will change this relationship.  Suddenly, 5G will elevate the role of the telecom infrastructure provider to an enabler of core aviation services such as drone detection and identification and the integration of IoT and artificial intelligence into the drone eco-system. In areas such urban air mobility UTM – in which ANSPs have arguably not yet found a clear role (will they be responsible for city UTM services or will this be the responsibility for cities themselves?) the telecoms companies now have a major, even dominant role to play.

Introducing 5G services to airspace management for both ANSPs and UTM service providers will create major disruptions, not least because the relatively large sums of money with telecom providers can quickly invest in these new technologies. There remain major technical issues to be resolved around 5G connectivity for aviation – especially in the area of cyber security – but there is also now a possibility, believe many in the industry, that the role of many UTM service providers will eventually evolve from pioneering the safe integration of drones with controlled and uncontrolled airspace to becoming UTM software suppliers to increasingly powerful telecom corporations.