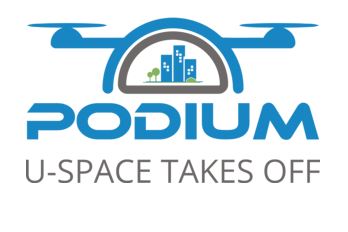 The project aims to collect and analyse feedback from drone operators, air traffic controllers, supervisors and authorities with a view to validating the ease-of-use and benefits of U-space. PODIUM seeks a strong engagement from stakeholders in order to strengthen its conclusions on maturity and recommendations for improvements.

For this reason, PODIUM is convening the following U-space visitor events:

Drafted by the SESAR Joint Undertaking, the U-space blueprint foresees a progressive deployment of U-space linked to four blocks of services and technologies: foundation services (U1), initial services (U2), advanced services (U3) and full services (U4). The PODIUM project will demonstrate the service levels U1, U2 and some limited U3 services, with the aim to validate its unmanned traffic management solution to technology readiness level (TRL) 7 (corresponding to system prototype demonstration in operational environment).

PODIUM will perform four complementary large-scale demonstrations – with over 185 drone test flights and many more opportunity flights – at Odense in Denmark, Bretigny and Toulouse in France, and Eelde in the Netherlands. Unmanned traffic management solutions will be demonstrated for visual line of sight (VLOS) and beyond visual line of sight (BVLOS) drone flights. The scope covers very low level operations in rural and urban areas, in the vicinity of airports, in uncontrolled and controlled airspace, and in mixed environments with manned aviation.

Under the leadership of EUROCONTROL, a comprehensive project organisation has been set up to realise the project, comprising:

The issue of a final report with conclusions and recommendations on deployment will be available in late 2019.