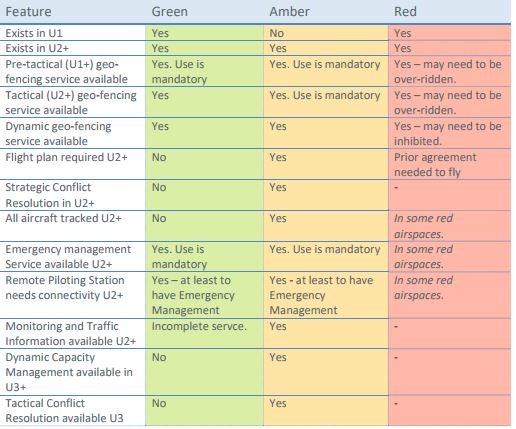 The Single European Sky ATM Research (SESAR) Joint Undertaking (SJU) has today approved the Concept of Operation for EuRopean UTM Systems (CORUS) U-Space development programme, which describes how U-space will be implemented progressively and outlines some charging (and non-charging) principles for each iteration of the U-Space blueprint.

UTM is seen as developing within four stages:

Within the CORUS concept there will be three classes of airspace categorised by different colours: Red Airspace is a No Drone Zone, a space that can only be entered with specific permission. Green Airspace places allows easy access but requires the remote pilot to maintain separation by maintaining visual contact with the drone at all times. Amber Airspace is introduced in U2 and provides strategic conflict resolution, but at a cost; access to this airspace requires a flight plan and tracking for all drones; even those flying in visual line of sight.

The following paragraphs are taken directly from the report and outline the principles of UTM evolution following by some remarks about charging.

“U1 is to be implemented as soon as possible. U1 will enable safe drone operations with a relatively low spatial density and with quite some limitations compared to U2. We expect that U1 will enable VLOS operations in some areas relatively easily for the operator. Beyond visual line of sight (BVLOS) will probably require explicit permission via manual processes that may take time. Separation during VLOS will be based on the visual judgement of the remote pilots. BVLOS operations in U1 will probably need “special permission” and be undertaken on the basis of reserving the airspace for the BVLOS flight using a Segregated Area or similar. This area will act as a geo-fence for the other flights and a geo-cage for the BVLOS flight. This process is may be slow due to the time required to define a Segregated Area or whatever is used. The process will require manual intervention and be costly. (Some states may find local solutions that are more efficient.) U1 includes standardisation of regulations, education and the creation of a registry for operators, pilots and to an extent, for drones.

“In U1 the existing aeronautical information systems (e.g. EAD) could possibly be used as the main channels through which geo-fencing / geo-caging are achieved, as danger areas or restricted areas – though we may see the emergence of a complementary system if the AIRAC/NOTAM cycles prove to be too much of a time constraint for safe BVLOS flights, or the number of geo-fences proves difficult for AIP. The key technical change in U1 is the requirement for e-Identification which lays the foundation for U2.

“U2 allows higher density of drones than U1. U2 also allows BVLOS operation without “special permission” which typically takes a long time to obtain, but instead by the submission of a flight plan. This is achieved in U2 by four main means.

“U3 further increases the capacity of the VLL to allow more operations. The key enabler for U3 is collaborative detect-and-avoid. In U3 we expect that drones will increasingly be able to act autonomously, particularly with regard to geo-awareness. U3 includes demand and capacity balancing as a necessary safety measure leading up to U3’s main new service – resolving conflicts in-flight.

“U4 is the more distant future and remains to be defined. The biggest challenge to be tacked in U4 is how to safely integrate drones to beyond VLL and among VFR manned aviation. It seems likely that V4 depends on a significant change; either technology matures that allows drones to “see and avoid” or that VFR flights all become users of U-space and drone collaborative detect and avoid, or something compatible.”

A crucial question when thinking about U-space is “who will pay for it?”

“Currently and in the near future the demand for U-space services may be relatively low. The commercial drone sector is currently dominated by inspection / photography type operations. These are relatively localised and tend not to produce many drone-drone interactions. Hence there is little public interest in developing expensive systems to boost drone-airspace capacity in the short term. Whatever we describe should be scalable but the core should be cheap.

“Inspection / photography type operations are relatively lucrative as the cost of not using a drone can be quite high, as it may necessitate a manned helicopter, an “aerial work platform” or similar. Hence CORUS assumes that the drone Inspection/photography operators will be ready to pay for U-space services, within reason. Having said that the inspection market is likely to grow “downward” as the availability of low cost aerial inspection triggers new applications such as roof surveys as part of house buying. Eventually we can expect inspection to be low margin.

“Drone Delivery operations are probably going to be low margin. This may not always be true, but certainly the view expressed by Amazon in their Prime-Air publicity was that drone delivery was a way to reduce delivery costs. Drone delivery operations, therefore, can be expected to pay for U-space but not a very high price. Drone delivery operations, however, are much more likely to trigger drone-drone interactions and thus need U-space services. Hence CORUS expects U-space will consist of some core activities that are run on behalf of the civil aviation authority (and paid collectively, whatever that means) and a collection of “added value” activities that are provided commercially to support drone operations (meaning paid by the user). The drone operators will have certain legal obligations and the commercial support companies will offer services that meet these. Larger drone operators may implement their own solutions. CORUS expects that these commercial service companies will need to be accredited. The core of the deployment will be a SWIM for drones that can be accessed by accredited service providers and the state.”

“In Amber airspace a flight plan is required for flight. Amber airspace can be understood as existing to allow BVLOS operations to occur with “blind” aircraft, although many types of operations are possible in Amber airspace. A flight plan is required for ANY and EVERY aircraft entering the amber airspace in order that de-confliction during flight planning can enable safe operations. (This requires that flight planning be easy and quick – especially for flights like medical evacuation or police which may be undertaken at very short notice.) Additionally the Amber Airspace requires that all aircraft emit position reports, and that these find their way to U-space, so that all aircraft in Amber Airspace can be tracked and an accurate air situation be visualised. Aircraft not fitted with position reporting, typically class C0 drones, or whose position reporting cannot be forwarded to U-space due to technical limitations, for example of the remote piloting station, will not be able to fly in Amber Airspace, even with a flight plan. Hence Amber airspace requires network connectivity for the remote piloting station and possibly also the drone. It is important to note that Amber airspace as described above is not amenable to the unplanned entry of manned aircraft, nor the entry of manned aircraft which do not have position reporting equipment.

“Amber airspace appears in U2 and this ConOps does not foresee safe interoperation with manned aircraft until U4. It may be BVLOS operations should occur in areas where there is no coverage whatever the usual communications channel being used for position reporting, e.g. mobile network infrastructure. In such areas operation of an Amber airspace may be infeasible unless some other means is used to send position reports to U-space and to receive services U-space (e.g. satellite communications). If Amber airspace is not possible then the BVLOS operation would have to be performed as in U1 with a dedicated Red Airspace; that is a Geo-fence around the BVLOS flight, which is also a Geo-cage for that flight, and very wide separation from other aircraft / drones.”

“In U1 and initially in U2 we expect all airspaces to be Green or Red. To fly BVLOS in U1 probably requires the publication in the AIP of a Restricted or Segregated Area around the flight, which is a Red airspace for everyone else. As BVLOS flights become more common in U2, airspaces where they are likely to fly will be made as Amber, thus removing the time delay associated with the publication of a new Restricted or Danger Area. Amber airspace may also be declared for other reasons as it offers a level of safety (and security) greater than Green and a higher capacity than Red. Hence areas of Amber will appear over time in U2. Hence initially in U2 we can expect some airspace which are occasionally Red to become permanently Amber.

“EASA Opinion 1-2018…seems to indicate that no flight plan is needed for Open categories of flight and some Specific category flights. CORUS foresees these operations in Green airspace. CORUS expects BVLOS flights to be planned. In U2 we expect BVLOS operations without any agreed systems for detect and avoid for drones, hence these BVLOS flights must rely on flight planning to achieve safety. EASA Opinion 1-2018 seems to agree, indicating that some specific category flights must be planned. For planning to provide safety, all flights in the vicinity must be planned. The Amber airspace is where all flights are planned and tracked. Hence CORUS expects flights that would otherwise not need a flight plan, like VLOS, will have to have a flight plan if it is flown in Amber airspace. Flights needing special permission in themselves The EASA Concept of Operations for Drones mentions the Certified category of operation. This is not developed in EASA Opinion 1-2018, but CORUS currently assumes it is a category of flight that in itself needs specific permission because it involves a high level of risk. CORUS view is that high risk operations will require a minimum risk of loss of separation and hence will be surrounded by a volume where others should not go. Hence the special permission flight needs its own Red airspace. Examples of special permission flights might be: