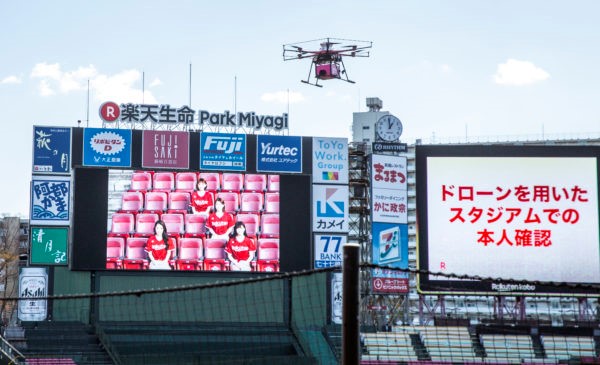 Rakuten Mobile Network, Inc. has announced the successful completion of a large-scale trial of technologies that demonstrate the capacity for 5G (5thgeneration mobile communications systems) infrastructure to manage drone operations.

According to a company press release: “The trial, conducted on November 15, 2018, included remote unmanned delivery robot operation, drone-based identity verification and 8K VR video streaming through the utilization of a 5G network, to realize a “smart stadium” experience.”

The over-the-air (OTA) 5G trial was carried out at Rakuten Seimei Park Miyagi in Sendai City, Miyagi Prefecture, in collaboration with Nokia and Intel Corporation, making use of Nokia’s AirScale base station and the Intel® 5G Mobile Trial Platform. Nokia leveraged its services expertise to optimize deployment of the base stations. It involved three components:

“The trial leveraged the high transmission capacity and low latency of 5G to remotely operate and monitor in real-time through 4K video a delivery made by an unmanned robot equipped with a 5G device. The robot was developed by collaboration between the Rakuten Institute of Technology and Utsunomiya University. The use of unmanned delivery robots in a 5G trial was a first for the Japan market, highlighting the potential of unmanned delivery robots for not only delivering items to customers within sports stadiums but as a significant solution in last-mile logistics applications.”

“In the trial, video captured by a drone was transmitted via the 5G network and used to identify individuals in the stadium. The trial demonstrated the potential of 5G for providing personalized services such as deliveries at major sports or entertainment events.”