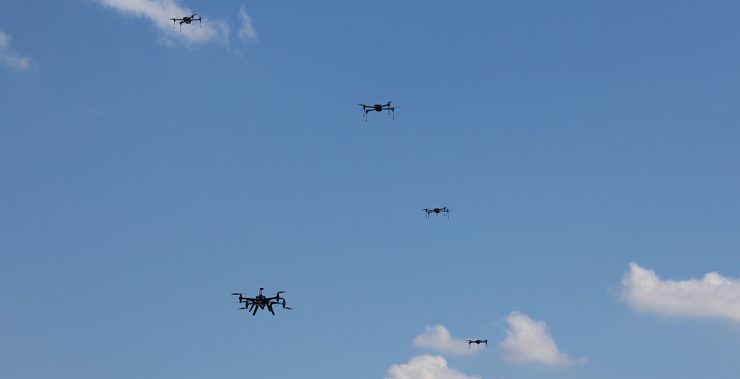 Oklahoma State University reports its Unmanned Systems Research Institute (USRI) has received its certificate of authorization from the Federal Aviation Administration to permit flights of a fixed wing aircraft swarm within national airspace, making it the first organisaiton in the country to receive this authorization.

“This flight authorization will permit a single pilot, along with visual observers for safety considerations, to operate a swarm of up to 20 fixed wing aircraft. The unique configuration developed by OSU researchers creates a “swarm of swarms” where groups of unmanned aircraft fly within smaller flocks as part of a larger swarm, communicating with a local group leader which then coordinates flights with the overall swarm formation,” says the OSU website.

“Swarms are the future of autonomous flight,” said Jamey Jacob, professor of mechanical and aerospace engineering and director of the Unmanned Systems Research Institute at OSU.  “This unique first of its kind approval just takes us one step closer to demonstrating for the first time the safe and efficient autonomous flight that will be common place in years to come.”

According to Gary Ambrose, Research Development Manager and Adjunct Professor of mechanical and aerospace engineering at OSU. “This step opens the door for many of our research partners and sponsors; as we expand their UAS operability and capability.”